Teyla Emmagan is character in the core cast ("the team", in many fans' parlance) of Stargate Atlantis. When the show begins, she is a leader of Athos (a planet in the Pegasus Galaxy) and quickly becomes a member of the Atlantis expedition's first contact team. She is one of a few with the ability to sense the presence of the expedition's most prominent enemy, the Wraith. She is a skilled diplomat and has extensive knowledge of Pegasus planets and cultures.

Teyla Emmagan is from Athos, a planet in the Pegasus Galaxy populated by a small community of farmers, hunters and traders. She is the daughter of Torren and Tagan. Her people are the first encountered by the Atlantis Expedition after their arrival in the galaxy. After a Wraith attack on Athos, Teyla and the Athosians relocate to Atlantis. Friction between the expedition members and the Athosians cause the Athosians to leave Atlantis and settle on Lantea's mainland. Teyla, however, stays with Atlantis and joins the first contact team led by John Sheppard. Despite initial fiction between Teyla and some of the expedition's military officers, Teyla assumes a position in Atlantis' command structure which, though never clarified on the show, is clearly of some importance. She is frequently left in charge of Atlantis in the absence of the city's regular leadership.

Due to experimentation by a Wraith scientist on her ancestors, Teyla and some other Athosians possess trace amounts of Wraith DNA. This genetic heritage allows her to sense the Wraith through their telepathic network. Throughout the series, Teyla's facility with Wraith communication and technology grows—presumably due to greater awareness and practice on her part. She flies a Wraith hiveship in the episode Misbegotten, and is immune to a Wraith device's hallucinatory signals in the episode Phantoms.

She is also a skilled fighter, and practices a form of martial arts called bantos, which uses one or two sticks called bantos rods. Fans usually refer to Teyla's fighting style as stick fighting, and her canonical sparring sessions with Sheppard are often mentioned in fanfiction. Teyla always wins.

In Season 3, it is revealed that Teyla has a romantic interest in an unnamed man, and in Season 4, she discovers that she is pregnant. The father is an Athosian named Kanaan. At the beginning of Season 5, Teyla gives birth to a son, whom she names Torren John. 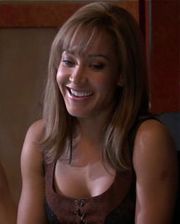 The canonical AUs were frequently focused on John Sheppard and Rodney McKay, so Teyla and Ronon Dex were rarely seen. There were some references to them, however.

As with the character of Ronon Dex, Teyla's character has at times been both the impetus and the flashpoint for fannish discussions of race and racism. (Rachel Luttrell is biracial; her father is white American, while her mother is from Tanzania.) There have been criticisms of the show itself for casting people of colour almost entirely in roles which indicate cultural/biological alienness. Teyla has also been the focus of debate about sexism in fandom, and there have been several discussions about the (lack of) portrayal of Teyla in fanfiction.

Although Teyla is not as prominently featured in the fanfiction as John and Rodney, she is a widely loved character, who gets almost universally positive fan response (among media slash fans), even as they critique the show's shortcomings in writing women characters and characters of color. Fans respond to her strength, her compassion, her sense of humor, and the fact that Teyla is undeniably a badass.

While there is some Teyla gen fic around, mostly in the form of teamfic, Teyla is frequently paired with other canon characters.

In het fanfiction, Teyla is usually paired with John (see John/Teyla), or Ronon, but Teyla/Rodney is also not uncommon;[1] in fact, the sticksandsnark community is devoted to an annual Teyla/Rodney challenge.[2] There is also quite a substantial amount of OT3 or OT4 fic, in which Teyla is romantically involved with more than one of her teammates simultaneously. There are also some fics devoted to exploring the complicated relationship which exists between Teyla and Michael Kenmore.

In femslash fanfiction, Teyla is most often paired with Elizabeth Weir (Teyla/Elizabeth). According to the sga_newsletter, it is twice as common as the next most popular femslash pairing, Teyla/Heightmeyer.[3] Teyla/Sora is also common in the femslash part of the fandom.