Andromeda Shun is one of the five main characters in the Saint Seiya franchise. He also appears in other Spin-offs like "Omega Chapter" or "Episode G". At a certain point in the story, Shun becomes the vessel for the god Hades. In the Netflix series "Knights of the Zodiac", Shun was genderbent and his name was changed to Shaun. 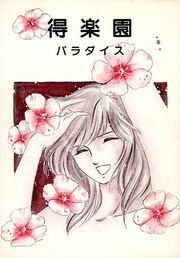 Shun has been from the beginning a controversial character for not adjusting to the archetype of masculinity of the time. He is a boy who has no shame in showing his emotions. He also has a peaceful demeanor and prefers not to fight if he can help it. That doesn't mean he's a coward, as with a heavy heart, he'll do whatever it takes if running away from battle is not an option.

From the beginning, some Saint Seiya fans have confused his pacifism with cowardice or lack of manliness.[1] The fact that his armor is pink (a colour associated with feminity), the chest piece is shaped as a pair of breasts and represents a female mythological character (Andromeda), also contributed to the mockery that a sector of the fandom directed at him, often from male fans. Although that today has changed, as times have changed and people became more open minded, it used to be more common to find fan comments and memes referring to Shun with homophobic slurs and sexist remarks. Some changes made in the original anime also contributed to his reputation as a softy, the fact that his brother Ikki frequently showed up to save him and finish his battles for him, thing that doesn't happen as often in the manga.[2]

The Libra temple scene in the anime generated both criticism and excitement. Fans (especially male fans) accused the animation studio of "making Shun gay" as he lays on top of Hyoga to warm him up. In the manga this scene happens differently, with Shun taking Hyoga in his arms and leaning him against his body.[3] In the Spanish-speaking fandom there is a recurring meme that says "what happened in the Libra temple, stays in the Libra temple", implying that they had sex while everyone else ran to the Scorpio house. This is the scene that made Hyoshun become the second most popular ship in the franchise. 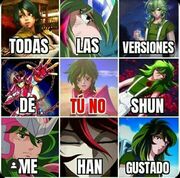 Meme in Spanish. It says: I. Have. Liked. All. NOT YOU. Versions. Of. Shun by Tania Peralta

In 2019, Netflix announced the premiere of a CGI remake of the classic series, with some changes in hopes of helping the franchise achieve what it never did (and still hasn't to this day): succeed with English-speaking audiences. One of those changes was Shun's genderswap. The change was made to have some female inclusivity in the group of five leads. However, the news was not well received in the fandom. Many fans argued that turning Shun into a girl was the worst decision they could make if they wanted some female inclusivity, as Shun, out of the five leads, deviated the most from the classic concept of masculinity. By making him a girl, it seemed to be sending a message: that his personal attributes (being sensitive, pacifist, gentle, considerate...) were feminine attributes[4]. Other fans called the decision "woke", while some disagreed, saying that there is nothing "woke" or feminist in changing the sex of a character like Shun, but on the contrary, it was a sexist decision. There were some memes saying that now, male straight fans could jerk off to Shun without feeling guilty. Eugene Son, the responsible for this decision, had to delete some tweets where he spoke about the need to change Shun into Shaun after backlash from fans.[5]

Shaun was better received in the Asian fandom and not many fans seemed to care about Shun being replaced.

In 2022, the controversy was reignited when the third season of Knights of the Zodiac premiered on Crunchyroll. In the first season Netflix made a lot of changes from the source material, created new story arcs, and used the characters in ways that would clash a bit with events that were going to happen later on. The changes of the first two seasons made it more difficult for Shun to be compared to Shaun constantly. With this third season, Crunchyroll decided to return to the origin and make the series more faithful to the manga. That meant scrapping the story arcs laid out in the first two seasons and making arrangements to fill in any plot holes that might arise from those changes.

With events being more faithful to the manga, the comparisons between Shun and Shaun began again. It didn't help that the creators decided to stick several close-ups of Shaun's bottom, wearing tight leggings. Some fans pointed out that unlike Shun, they were sexualizing Shaun. A few threads were created in Twitter, showing screencaps of the scene where a group of skeletons jump on top of her and grab her arms and legs. The scene where Shaka ties her up to a pillar with her own chain was also seen as sexual.

The controversy was especially fierce in the Spanish-speaking fandom, where on the Universo Saint Seiya podcast, the hosts and the audience ended up in a rather heated discussion about whether Shaun was "basically like Shun but in girl", or had been transformed into a generic anime dumb girl.[6] Despite being polite at all times, some listeners accused the Shaun defender collaborator, (César) of being too stubborn and not listening to reason. The argument moved to Twitter, where both hosts and audience continued to defend their positions. Some called for César's expulsion from the podcast.[7] Some people expressed fear that something similar would happen again the following Wednesday (the day the weekly podcast takes place).Those comments against Shaun from various BNFs caused many more accounts to jump on the Shaun hate bandwagon. Soon, Shaun's supporters were being flamed, or accused of only liking her because of the butt close-ups.[8]

The following week Crunchyroll released the Libra house chapter and the wank turned for the worse.

That scene, already very controversial in the original series, sparked the anger of many fans. In the original anime, the group comes across one of their comrades, Hyoga, locked in a huge block of ice. They rescue him and while Seiya and Shiryu carry on to Scorpio's house, Shun stays behind to revive Hyoga using his life energy. In KotZ this scene underwent several changes, with the protagonists thinking that Hyoga was dead and leaving Shaun alone with him, as she was blaming herself for his death. When Seiya and Shiryu are gone, Shaun discovers that Hyoga is alive and begins to revive him, warming him up with her Cosmos.

Shaun haters criticized her for not being upset enough by her brother's death at the hands of Shaka, only to later break down and cry for Hyoga.[9] As an argument against that, some fans pointed out that Shaun breaks because she believes that Hyoga is dead and blames herself for it (she tries to save him from falling into another dimension a few episodes back), while in the Virgo house she was trying to stay strong.[10]

Another thread that caused quite a stir was one started by Naiya, where he talks about Seiya and Shiryu leaving Shaun alone because "she's too emotional and therefore a burden to us." Other fans didn't see anything misogynistic on the scene and just assumed that Seiya and Shiryu were only giving her some space, as they acknowledged her feelings of guilt over Hyoga's death, but Naiya's thread and his personal interpretation of the scene (where he threatened with violence to anyone who disagreed with him[11]) reached more people and stoked rage against Shaun further. The thread was criticized for "trying to combat perceived cartoon misogyny with misogyny and violence against real people"[12] and for pushing Naiya's personal interpretation of the scene as the only valid one, when in reality is quite problematic per se.[13][14] It didn't help that Hyoshun's shippers were already angry to see their ship becoming "forced heterosexuality"[15], even though nowhere in the source material does it specify that the same scene with male Shun was homosexual or it was ever hinted in KotZ that Shaun ans Hyoga are dating or have feelings for each other.

That same day, SSMythclothEX submitted a hate fanart of Shaun, where Hyoga is strangling her with her own chain to the Saintober.[16] From there, some fans began to get the feeling that everything was going too far and that it wasn't right. Some came to the conclusion that Shaun was being blamed for a treatment she was receiving from Crunchyroll and that it wasn't her fault. Many hate messages towards her were deleted. The drawing was criticized for being misogynistic and in poor taste.[17][18]

Later, several fans called the rest to sanity. majuu.pacheco posted various fanarts of Shaun covered in bruises and injuries after being bashed left and right by the fandom and Shun, her male counterpart, giving her a hug.[19] After the criticism, SSMythClothEX rectified and made another entry for the Saintober called "The true forgiveness" where Genet comforts Shaun and Shun fights against "the toxic fan".[20] 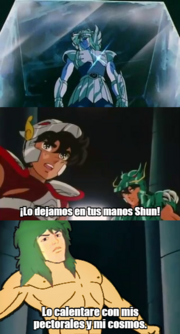 Meme in Spanish. Seiya: "We'll leave him in your hands, Shun." Shun: "I'll warm him up with my pecs and my cosmos."

Things calmed down after this.

Shun and Guardians of the Cosmos discovery

In December 1 2022, a tape of an old unreleased cartoon named "Guardians of the Cosmos" was discovered by TheRayMona. The tape contained a western version of the series similar to Saban Moon. It immediately caught the attention of fans that Shun's design was quite bulky and muscular, since he has always been the least corpulent of the five main characters. He was nicknamed by fans "Gigachad Shun" and given the headcanon that he is the one saving Ikki in this alternate universe and not the other way around. Memes about what the scene in the temple of Libra would have been like with this ripped version of Shun were immediate.

All other shun ships are super rarepairs.