In the early books, Ginny is mostly characterized by her painfully obvious crush on Harry, which causes her to be bashful and clumsy around him. Since the books are in Harry's POV, this causes her to come off as a shy romantic type. However, the early books do have some hints that Ginny is more outgoing normally. Ginny has a significant behind-the-scenes role in the second book, in which she starts Hogwarts and spends the year being possessed by Tom Riddle's diary, but she's largely irrelevant in the other early books.

In the fourth and especially the fifth book, Ginny is characterized as much more assertive and is revealed to have begun dating. In the sixth book, Harry develops romantic feelings for her, and they start dating each other in the same book. Ginny states that she never really gave up on Harry and that she only dated other boys to try to get over him. By the end of the seventh book, Harry and Ginny are married with three children: James Sirius Potter, Albus Severus Potter, and Lily Luna Potter.

Ginny has often, in some circles (such as Harry/Hermione or Harry/Draco shipper circles), been a victim of character bashing. This is presumably a result of backlash towards the Harry/Ginny canonical ship, which seemed to threaten the existence of those other ships. Some have claimed she is a Mary Sue (guilty of being too perfect), while others have argued against that judgement.[2] Others have called her a slut, and various other misogynist names, as Mrs. Bombastic cataloged to prove such character bashing is prevalent.[3] 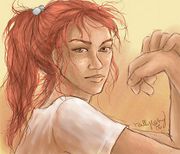