Dean Thomas is a secondary character from the Harry Potter series. He is a Gryffindor and one of Harry's dormmates.

Dean Thomas is a Gryffindor in Harry Potter's year, and shares a dormitory with Harry, Ron, Neville, and Seamus. Dean was raised as a Muggle and is a huge West Ham football fan. He is also a talented artist, illustrating Quidditch and Triwizard Tournament banners in support of Harry.

Originally primarily a background character, Dean gets a larger role in the final two books of the series. He spends much of Half-Blood Prince dating Ginny Weasley, and also joins the Gryffindor Quidditch team. In Deathly Hallows, Dean goes on the run from the Death Eaters because he is believed to be Muggle-born. He is eventually captured by the same Snatchers that then capture Harry, Ron, and Hermione, and he is present during their imprisonment at Malfoy Manor and subsequent escape to Bill and Fleur's cottage, where he stays for some time with Luna.

Dean returns to Hogwarts to fight in the final battle against Voldemort. There is thus far no canon information about Dean after the Battle of Hogwarts, though it is assumed that he survives it. 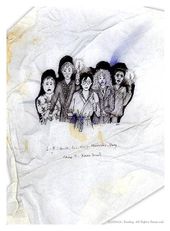 This early drawing by J.K. Rowling shows (L-R) Neville, Ron, Hermione, Harry, and "Gary," Dean's original name in early Philosopher's Stone drafts.[1] The sketch illustrates a scene from a PS draft where the group sneaks out of bed and encounters Fluffy. (In the final canon, Dean is not present during this scene.)

The American version of the first book describes Dean during the Sorting ceremony as "a Black boy even taller than Ron," but this line was cut by Rowling's British editor,[2] and Dean's physical description was not given in any of the other books. As a result, many non-American readers did not know Dean was meant to be black, though some believe that Dean was "coded" black in various ways.[3] When the Philosopher's Stone film was being cast, Rowling told director Chris Columbus that Dean was a black Londoner, so a black actor (Alfie Enoch) was cast for the role.

When J.K. Rowling's redesigned official site was relaunched in May 2004, it included an "Extra Stuff" section for information and plotlines cut from the final books, including a section on Dean. Rowling revealed there that she had originally envisioned Dean to have a larger role in the series but had "never found the right place to use [his story]," and that "in some ways [she] sacrificed Dean's voyage of discovery for Neville's, which is more important to the central plot." She provided the following background for Dean on the site:[4]

Dean is from what he always thought was a pure Muggle background. He has been raised by his mother and his stepfather; his father walked out on the family when Dean was very young. He has a very happy home life, with a number of half-brothers and sisters.[5]

Naturally when the letter came from Hogwarts Dean's mother wondered whether his father might have been a wizard, but nobody has ever discovered the truth: that Dean's father, who had never told his wife what he was because he wanted to protect her, got himself killed by Death Eaters when he refused to join them.

This backstory was alluded to in Deathly Hallows, when, when asked if he was a Muggle-born, Dean replied that he was "not sure": "My dad left my mum when I was a kid. I've got no proof he was a wizard, though."[6] Many fans were intrigued by Dean's backstory and disappointed that more of it did not make it into the novels; as a result, it is a very popular topic in Dean-centric fanworks.

Dean is very popular among fans due to his easy-going nature and loyalty to Harry and the series's other protagonists, notably Remus Lupin and Rubeus Hagrid. However, he is not often the focus of fanworks, instead usually serving a background role.

One fan on Tumblr writes of Dean's appeal to fans:

Dean, I feel like, is supposed to be this proverbial blank slate for all of us who imagined ourselves as Muggleborns (although he’s later revealed to have been a half blood) to project onto. He quickly makes a name for himself as artistic and imaginative, picks up magic like a duck to water and makes friends really quickly with his dorm mates. [...] Dean is one of those characters that sorta blossoms in the background while you weren’t looking, and you’re left wondering where this Cool Dude came from.[7]

Alfie Enoch, who plays Dean in the Harry Potter films, is also popular figure in fandom. He inspired a trend of same-actor crossover headcanons involving Dean and Enoch's characters in Sherlock and How to Get Away with Murder.

Historically, Dean/Seamus is the most popular pairing for Dean, due to their description in canon as best friends who are nearly always together, even at times during summer holidays. It is also common as a background pairing, especially to other slash ships.

Prior to the publication of Order of the Phoenix, Dean was commonly paired with Parvati Patil. Dean/Parvati was a common side pairing to Seamus/Lavender (which gained popularity because they went to the Yule Ball together), and it also had some canon support with Dean calling Parvati and her identical twin Padma "the best-looking girls in the year."

Dean/Ginny also had a modest following even before OotP. Ginny's pronouncement at the end of OotP that she had "chosen" Dean (in response to Ron's instruction to "choose someone better [than Michael Corner] next time") led to much speculation about what she meant and the actual extent of their relationship, and also led to increased support for the ship. Despite their break-up in Half-Blood Prince, there is still support for the pairing, particularly by fans who do not ship Harry/Ginny. In fanworks pairing Harry with another character, Ginny is often described as getting back together with Dean.

Following Deathly Hallows, Dean/Luna became popular, though it had a small following since Luna's introduction in OotP. Many fans feel that the possibility of a Dean/Luna romance was implied in canon by the scene in which Luna takes Dean's hand as they go to join the Battle of Hogwarts. (However, according to Rowling, Luna ends up marrying someone else.)

Dean often appears as a background character alongside Seamus in Hogwarts Era fics, especially those about the trio.

Most Dean fanart is either a portrait, a simple scene with another character (usually Seamus Finnigan), or a group scene. Shippy or explicit art with Dean exists but is less common.