Rubeus Hagrid is a secondary character from the Harry Potter series, a gentle (half-) giant, gullible yet wise, with a penchant for dangerous creatures.

Hagrid attended Hogwarts in Tom Riddle's era. He was expelled after Riddle successfully blamed him for the death of Moaning Myrtle; his wand was snapped but he later appears to use it concealed in an umbrella. Hagrid is the first magical person Harry meets, and he befriends him and the rest of the Trio. He is a loyal servant of Dumbledore, frequently running errands for him (though often failing to keep them secret through his gullibility), a member of the Order of Phoenix, and a combatant in the Battle of Hogwarts.

He is played in the films by Robbie Coltrane.

Hagrid is no saint; he's one of the "Good Guys," but he's flawed and just as prone to unthinking prejudices and careless actions as anyone else. He's also just as likely as anyone else to be deserving of trust, considerate of others' feelings, and competent. Hagrid is not merely a 'comic rustic," nor is he a child . . . he's an adult, with all the strengths and weaknesses of any other adult in the Wizarding World. (Beth H)[1]

I tend to think about Hagrid and Lucius in tandem, because Hagrid is the opposite side of the fanon coin: he has almost exactly the opposite virtues and drawbacks as Lucius. ...

...It is easier for me to picture almost any other canon character in a dark version than Hagrid.

Hagrid’s moral function in hp fanfiction seems to be rather obvious: as in canon, he usually represents simple goodness. But fanon Hagrid serves other, more complex fuctions, as well. Fanfiction Hagrid is one of the main vehicles, for example, that writers can use to explore issues of class in hp.... Hagrid ... has no claims to respectability: he is blatently and gloriously working class, only partially-educated, and impure of ancestry.

Hagrid can also be used for a particular sort of genderplay, or gender role reversal. In hp canon, we have a serious lack of engaging adult women in important roles, IMO, and this lack carries over into fanon. So, Hagrid ends up filling some of those functions, particularly vis-à-vis Harry (who needs a nurturing parent) or Snape (who needs more help with socialization and relationship building skills, full stop). Fanfiction Hargrid is often very nurturing in the most basic ways (much more than McGonnagal, when it comes to taking care of Harry). He tries to cook, and he gardens: in fact, he is as good a homemaker as Molly, in many ways. (Cordelia_v)[2]

Hagrid does have a sweetness of character almost unknown unique in canon, but I have problems with his irresponsibility and incompetence. ...
It's a worry that about the only nice guy with no axe to grind (because Arthur Weasley, for example, even if you think he's nice, has axes to grind in spades) should be depicted as unreliable and dangerous to everyone around him. Nice guys don't just come last, they set up other people to trip and break their necks, in JKR's world. Shame, that. (Leni Jess)[3]

I recently started wondering whether Hagrid is supposed to be yet another example of an adult who hasn't managed to overcome his (or his parents') flaws in HP. ...

Start with the big question: how did Hagrid's father get together with Fridwulfa the giant? ... So what was Fridwulfa doing with a tiny little human man? And what did Mr. Hagrid see in a 20'+ giantess? That sounds like some pretty extreme dating. Maybe Mr. Hagrid had a thing for "interestin' creatures." (Maybe she did too.) Hagrid said his dad was heartbroken when Fridwulfa left. That's normal for someone whose spouse has just run off, but I keep picturing him as being like Hagrid when he had to send Norbert to Romania, or when Aragog died. Hagrid never seemed to get that no matter how interesting and loveable Norbert and Aragog were, they were also dangerous. ... Was Hagrid's father the same way - seeing something fascinating about Fridwulfa, but just not getting that she was not going to settle down with him and a picket fence and babies? I can't prove it, obviously, but I could see it.

So little Rubeus grew up to share his father's hypothetical fascination with dangerous creatures. Maybe he also felt some sort of kinship with them, or felt like he had to prove that they really were just cuddly and harmless to convince himself that he wasn't dangerous like everyone said giants (and half-giants) were. And that keeps getting him in trouble, or almost. Maybe someday one of those spiders will eat a kid, or a new creature will smash the castle, or turn on Hagrid and tear him to pieces. It's a constant risk, because Hagrid keeps collecting interesting creatures. (Sunnyskywalker)[4]

i think one has to consider hagrid's character next to lupin and firenze. in different ways, all three represent outcasts of their races, living in the wizard world. there is a lot going on in terms of pureblood/wizard superiority that shapes how these characters lives have unfolded and how people interact with them. hagrid's tale seems like another powerful example of rowling's that demonstrates the oppressive attitudes and institutions the wizarding world must deconstruct before they can truly be free of voldermort's wrath. (fawkesflight)[5]

Hagrid is relatively liked as a character, especially by younger fans.[1] He's usually considered to be morally good,[2] caring & loyal, though some adult fans consider him stupid, irresponsible, naive and/or childlike.[1] He gets little exposure in fanworks, especially compared with his relative importance in the novels; Beth H stated in 2004 Generally speaking, HP fiction largely ignores Hagrid, using him as little more than a bit of background color in stories, when he's included at all. ... there seem to be very few well-written stories with Hagrid at their heart.[1] Some possible reasons are his age & relative unattractiveness, his perceived childlikeness[6] & lack of intelligence,[7] the squick factor of seeing a half-giant in a pairing with a human, his being perceived as a flat character in the novels,[8] and the difficulty of portraying his accent.[1][2] His critical canonical role of introducing Harry to the wizarding world is so often usurped in fanfiction by Snape that the scenario's become a cliché.

Hagrid sometimes appears in fanfiction as a background character, for example in Triofic, but only rarely plays a key role. Like Molly Weasley, he often acts as a nurturing archetype for Harry. Where he's not given a pseudo-maternal role in relation to Harry, Hagrid is rarely written as a paternal authority figure or a mentor (like, say, Lupin); he tends to act as a big brother (like, say, the older Weasley brothers). Unlike Molly, his nurturing role often extends to Snape.[2] He's rarely written in a close gen relationship with characters other than these two. Cordelia_v considers him to be one of the main vehicles ... that writers can use to explore issues of class, as one of the fandom's few unreconstructedly working-class characters.[2] Unlike most other HP characters, he's very rarely written as dark, though some stories exist.[2] The majority of works are probably set while Harry is at Hogwarts, though some Riddle-era Hogwarts & post-War futurefic have also been written, and occasional works also address growing up as a half-giant pre-Hogwarts.

Most Hagrid-centric fanfiction is gen,[2] and many fans prefer not to read pairing stories for Hagrid.[1] The main ship is Snape/Hagrid, despite the fact that Snape appears to have little time for him in canon, which has a small but devoted following. Snape in these stories tends to be at the less attractive end of the Snape spectrum (he is not a Slytherin Sex God, when he's sleeping with Hagrid), to quote Cordelia_v again.[2] Hagrid's doomed canonical romance with Olympe Maxime gets a little attention, and she's probably his most common female partner.[9] A scattering of other pairings, both het & slash, have been written, and Hagrid turns up at the HP Beholder fest for rare pairs featuring characters that are not conventionally attractive. Explicit stories are the exception; they often involve size kink,[10] sometimes centaurs,[11] and just occasionally his penchant for dangerous creatures makes it into the bedroom.[12] Sometimes he wants to be loved for his character and not for the size of his endowment.[11]

There is a moderate amount of fan art, mostly gen, but with a little in a variety of het & slash pairings. There are many portraits of Hagrid, sometimes with his dangerous pets, sometimes with Harry or all three Trio members; he's rarely portrayed with Hermione or Ron without Harry, or with anyone else. Illustrations of scenes from the novels are common, including taking baby Harry to the Dursleys, the shack where the Dursleys hide from the Hogwarts' owls, taking Harry to Diagon Alley, and carrying Harry in the Battle of Hogwarts. Hagrid is frequently portrayed in a cute, cartoonish style though he rarely gets the big-eyed chibi treatment. Plenty of more realistic portrayals also exist, both based on Coltrane and inspired by book canon. Hagrid's hut is another common subject. There's also a little fan craft, including knitted & other dolls, sculpture and models, and fans have created recipes for his infamous rock cakes.

Meta sometimes addresses Hagrid's flaws in the light of his clear canonical presentation as a Good ManGiant, including his drinking habit, his attempt to turn Dudley Dursley into a pig, his imprisonment of his half-brother, and his irresponsibility around dangerous animals.[1][4] Before canon was closed, fans speculated as to Hagrid's potential role in the endgame; for example, Sunnyskywalker predicted that he would die in the final novel after his flaws had been highlighted.[4] 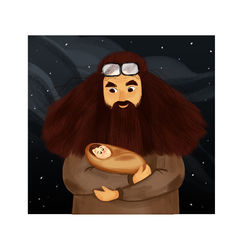