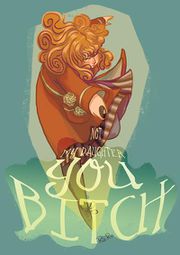 Not my daughter you, bitch! by RaRo81 illustrates Molly's highly memed moment.

Molly Weasley is a mother of seven, including Ron Weasley (Harry's best friend) and Ginny Weasley (Harry's future wife) in J.K. Rowling's Harry Potter series of books. She is an overprotective woman, dedicated to her family. Molly becomes a mother figure for Harry from her first introduction, when she helps Harry get through the barrier to track 9 3/4. She is married to Arthur Weasley.

A subset of fanfiction stories portray Molly as a negative character, referred to as character bashing. This is sometimes paired with negative portrayals of her daughter Ginny Weasley, where Molly and Ginny plot for Ginny to marry Harry Potter to have access to, or even control, his (assumed) fortune.

Molly’s line in The Deathly Hallows, “Not my daughter, you bitch!” has been thoroughly memeified, even outside of fannish circles, and features frequently in fanart of the character.

Perhaps in response to such criticism, J.K. Rowling stated in a post-Deathly Hallows interview that she had picked Molly to kill Bellatrix because she wanted to "show that because a woman had dedicated herself to her family does not mean that she doesn't have a lot of other talents" and because "Molly was really an amazing exemplar of maternal love".[3]

For more examples of negative portrayals, AO3 has a Molly Weasley Bashing tag.