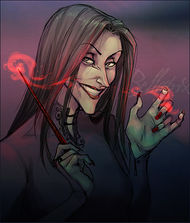 Bellatrix was one of Lord Voldemort's most devout and trusted followers, and was entrusted with one of Voldemort's Horcruxes. Though she married Rodolphus Lestrange, J. K. Rowling has said that she only married because that was what was expected of her, and "her true love was always Voldemort."[2]

Over the course of the last three books, Bellatix murdered her cousin Sirius (whom she considered to be a "blood traitor"), tortured Hermione, killed Dobby, and killed Nymphadora Tonks, the daughter of her estranged sister Andromeda Tonks.[3] Bellatrix was eventually killed by Molly Weasley during the final battle. 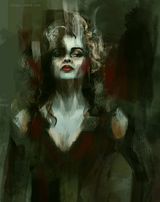 A digital illustration of Bellatrix Lestrange, Archived version by ladynlmda. This fanwork is based on Helena Bonham Carter's film portrayal of Bellatrix, in contrast to earlier fanart that tends to portray Bellatrix as less visually appealing.