Neville Longbottom is a character in the Harry Potter series. He is one of Harry's dorm-mates and, though he initially seems to serve only as comic relief, ultimately plays an important role in the defeat of Lord Voldemort

Neville was brought up by his grandmother after his parents, Frank and Alice Longbottom, were tortured to insanity by Bellatrix Lestrange. Throughout the first several book, he suffered from self-esteem issues, likely because of his grandmother and other relatives' apparent disappointment that he didn't measure up to his famous Auror father. He was also forgetful and clumsy and pretty inept in all his classes until finding his niche with Herbology and otherwise gaining confidence. Some fans also attribute his improved skill to his acquisition of a new wand after Order of the Phoenix. He was constantly bullied by Professor Snape while in his class, and Snape was the thing he "feared most" in his third year.

In Deathly Hallows, Neville led the Hogwarts resistance against the Death Eaters with help from Ginny and Luna. He was also vocally defiant of Lord Voldemort, even after Harry's apparent death, and beheaded Nagini, Voldemort's snake and the last Horcrux. 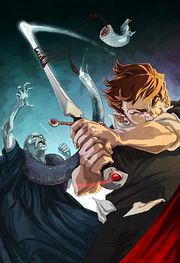 The Herbologist by Forbis. An illustration for HP Art Project depicting Neville's crowning moment of awesome when he beheads Nagini in book 7.

In canon, he is described as round-faced and plump (at least in early books--fanon says he grew out of it). His hair colour was never given in the books, but J. K. Rowling has described him as blonde; however, fanon usually gives him brown hair (possibly because of Matthew Lewis, who portrays him in the films)

Before canon was closed, there were several theories about Neville's role in the books...