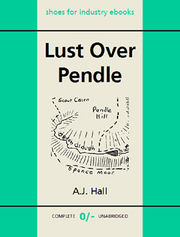 cover of Lust Over Pendle

Lust Over Pendle is a novel by A.J. Hall. It is part of a series of Harry Potter slash stories sometimes referred to as the Lopiverse, and one of the two major works of the series, the other being the sequel, Dissipation and Despair. The central pairing is Draco/Neville, though never very explicit; it was probably responsible for popularising the pairing.

Summary from the author: "A comedy of manners, in the Golden Age detective thriller genre, set in the year immediately after Voldemort's fall. Lust Over Pendle begins when a Daily Prophet paparazzo manages to take a sneak photograph on the beach at an exclusive Indian Ocean hideaway resort, and the families of both Neville Longbottom and Draco Malfoy find themselves Very Startled Indeed."

It was first published in installments to the archive FictionAlley between April & July 2002, and later released by Shoes for Industry as an e-book.

2002 Interview With the Author

Lust Over Pendle was highly popular and very widely recommended, appealing both to slash fans and to those who predominantly read gen (or even dislike slash), to Harry Potter fans and to those disliking the source. It has been positively reviewed by readers who don't generally read fanfiction.[1]

Reviewers particularly praise the humour, the pastiche style and the characterisations, particularly of Narcissa Malfoy. Many reviewers praise the author's vision of Draco and Neville; others find particularly Neville too far from canon to be comprehensible without more detailed exposition.[2]

Bizarrely titled, ridiculously long, PG-rated at most, solidly slash but not all that slashy...well, it's not for everyone. But since it's also deeply charming and quite clever, I have to recommend Lust over Pendel, by A.J. Hall. The pairing is Draco/Neville, but the pairing is almost beside the point -- You need to read this for the plot, the richness she adds to the HP universe, the side characters (especially Draco's mother and Neville's wonderful Slytherin grandmother), the deftness of the Austen-pastiche...and the most charming Draco I've read yet. (Sandy Herrold)[3]

Must-read. Vicars! Narcissa and Hermione and Neville and Draco, and and and it has vicars! These novels have everything to recommend them—drama and suspense and hilarity, but I have to highlight Hall's characterizations of Neville and Draco, which are stupendous. ...


My very favourite slash relationship for a hundred reasons. For one, I love the way Hall handles the gay-in-a-small-community thing—the way all the minor characters spring to colourful life and react like people do. She's writing a mystery story; she doesn't waste time on any Epic Slash Angst, but her central relationship isn't mentioned once and then forgotten, either. Every gay person knows: Ya don't come out once. (Stultiloquentia)[4][5]

Deservedly a fandom classic: AJ Hall has had a ball with Rowling's universe. The characters are developed far beyond the two-dimensional ciphers of canon (the author's vision of Narcissa Malfoy is particularly memorable). Although the pacing occasionally flags, the light humorous tone works well and the Bond-style finale is a romp. (Espresso Addict)[6]

It's a great long read, so make sure you've got plenty of time; you won't want to put it down. Funny, snarky, silly, and very British. The main pairing is Draco/Neville, but there's a lot more going on besides that." (Nestra)[7]

Then again: tone of fandom. Is what, exactly? I mean, I know when I think it's right, and so does everyone else. The example used in naomichana's post was the HP story Lust over Pendle, which I've made several efforts to get into, but which doesn't click at all with me as Harry Potter fanfic. As far as I can tell, it's Harry Potter by way of Terry Pratchett; it's very funny, and it doesn't connect with whatever it is that I perceive as the core of the potterverse, but clearly it makes that connection for many other people. Now, if this writer had some Pratchett fanfic, on the other hand....

The idea that it is desirable for fanfic to be compatible, in tone and/or subject matter, with the source material unfortunately made me explode through trying to agree and disagree at the same time. If you look at it one way, it's the whole more vs. different question--do you want more of the same, something as close to the source material as you can get, or do you want something different, something that goes places the source material never did? And my answer to that is usually a resounding and confusing yes, please. I like more, and I like different. I like a connection to the source material, yes, but I tend to think of that mostly in terms of believable characterization; I do think it's possible for a horror fandom to support a romantic comedy, and vice versa. But then again, there are times when tone is everything. [8]

Why has nobody told me about this fic before? ... It's a WIP, but it seems to be regularly and recently updated... The writing style is clear and easy to read, with a decided sense of humor; Hall is a CC fan, according to the FA profile, and I can see the connection. The British atmosphere seems great to this over-the-pond reader. If you're only looking for smut, though, don't read this; the D/N relationship underlies what's going on but doesn't get screen time as much as I'd like, smut or non-smut. That said, the characters seem very real, and there are strong female characters! I'm fond of Neville and delighted by Draco. And more-than-marble Narcissa is just amazing. And as for Neville's grandmother, that old bat, I definitely want her on my side! Definitely the catch of the day. (Morgan Slightlights)[9]

One work that also manages to make Draco interesting is A.J. Hall's Lust Over Pendle, which was just completed and is, accordingly, the reason I'm writing this now. ...

Lust Over Pendle doesn't push my dislike-of-slash buttons for a couple of reasons. It begins with the relationship already in existence, several years after Draco & Neville, we are told, came out (separately). It's far less work for me to believe that the sexuality of minor characters, who we last saw at fourteen or so, might not be what it appeared then. ... And beyond all that, it's a lovely and believable relationship. We aren't told that much about how they got to be the people they are today, but you can see the traces of their canon selves, and it works.

There are a number of notable things about this novel. For one, anyone who's complained that sf needs more cranky old women really ought to check this out. The main thing, though, is the tone, which is impressive in a very baffling sort of way—because I have no idea how the author pulls it off. ...

It is indeed a comedy of manners, and a clever and light and funny one. At the same time, it convincingly portrays Voldemort's defeat as a war, an actual modern war with allied commanders, sweaty moments on urgent missions, people being stuck doing necro-cryptography during the mopping up phase, and combat flashbacks—very different from the mythic one-on-one confrontation I imagine Rowling to be working up to. (There is a passing reference that suggests it did come down to Harry at the end, but the full backstory isn't given; I'd love to read it if the author wanted to write it.) Quite nasty things happen during the story as well, and yet it manages to preserve the light tone while treating the nasty things seriously. I can't really think of anything that pulls off quite the same effect; Barry Hughart, for slightly different values of light tone, but that's all that comes to mind right now. It's quite an accomplishment. ...

It has great characters and dialogue as well...

My only complaint about Lust Over Pendle is that it ends a touch abruptly, though the Epilogue addresses some of that. (Kate Nepveu)[10]

This is quite possibly the best Harry Potter novel you will ever read. I originally wrote "that isn't by J.K. Rowling" and then realised that's a foolish way of putting it. J.K. Rowling writes school stories with magic. A. J. Hall writes comedy of manners with detective overtones. Oh, and magic. And I do like comedy of manners much better than school stories, as a genre.

Yes, it's slash. Yes, it's Draco/Neville slash. Yes, there is a tiny amount of Harry-bashing. (No more than he deserves. No, really.) Please don't let any of that put you off. ...

This is seriously good stuff. Do not avoid reading it because you are muttering to yourself "Draco/Neville? I'm not interested in Draco or Neville!" because really, that's not the point: the point is these are a serious, funny, seriously funny, out-take on the Harry Potter universe that just happens to focus on, and make real people of, two of the stockiest of stock characters in the Harry Potter series. (Jane Carnall)[11]

Because they're unique, which is a rare and precious thing in fan fiction. A characteristic which unfortunately makes them slightly hard to recommend, because I don't quite know where to start.

The basics first: they're both detective stories, in the Golden Age tradition. As such they feature an ancestral pile (with obligatory leaky roof); a fraudulent engagement; a damsel in distress; a variety of eccentric characters and other standard characteristics of the genre. As they're taking place in the wizarding world they also feature a werewolf, the odd bit of necromancy, and a magical doomsday device. All this and so much more: political satire; religious commentary; interesting legal detail about tomb desecration and general wit about the human condition.

The real attraction, however, is the way that these elements are weaved together. The magical world meshes perfectly with the non-magical, which is itself a glorious mix of the real England with that England that only exists in fiction. And while all this is going on the plot drives forward and the characterisation remains impeccable. As I said they're unique, and compelling – not to mention frequently hilarious.

And anyone who's taken one look at the pairing and rejected them is missing one of the best series in the fandom. Trust me, it works here. (onijade at Crack Van)[12]

I don't care who you are, and what your OTP is, but after this story you simply won't be able to get enough of Draco/Neville. Armed with exquisitely light humor, golden turns of phrase and fizzing dialogue, this is one of the few true immortal works of slash on the Net. (switchknife)[13]