Hermione Granger is a main character in the Harry Potter series. She is one of Harry's best friends and is considered the brightest witch of her generation.

Hermione is a Muggle-born, meaning she was born to non-magical parents. She is thus subject to much discrimination from blood purists and outright danger from Death Eaters.

Little about Hermione's home life is known, and her parents have only a handful of mentions in canon. In 2004 Rowling mentioned that she had a younger sister, but this character was never mentioned in the books and appears to have been dropped from canon[2]. Though it was J.K. Rowling's intention to make Hermione's family "quite ordinary," some fans have pointed out that Hermione hardly ever sees her parents, and have interpreted a strained relationship between them.[3] When black actress Noma Dumezweni was cast as Hermione in the play Harry Potter and the Cursed Child Rowling pointed out that she had never stated Hermione's race.[4] (See: Hermionewank)

At Hogwarts, Hermione was consistently the top of her year. Though fans sometimes question the nature of Hermione's intelligence,[5][6] she was undoubtedly instrumental in assisting Harry in the fight against Lord Voldemort. 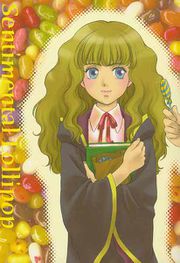 Hermione is generally well-liked, one fan even stating that she "is arguably one of the best female role models in any children's book."[7]

Though Hermione is less often a victim of character bashing than Ron or Ginny, certain aspects of her character have been called into question though essays, meta, and wank.

A good fanart example to show the difference between the character shown in the books and one portrayed in fanfiction is: Hermione Book vs. Fanfic by The-Starhorse

Hermione has been described by some as "ruthless," and many fans questioned a number of her actions, including:

In addition, she has also been accused of prejudice due to a comment about Firenze,[11] and there has always been mixed feedback regarding her pursuit of "S.P.E.W."[12]

Most of the criticism of Hermione seems to be an example of resistant reading--that is, J.K. Rowling did not intend for readers to interpret Hermione's actions negatively. For example, when asked if Marietta's pimples (the result of Hermione's curse) ever faded, Rowling replied: "Eventually, but it left a few scars. I loathe a traitor!"[13] This implies that Rowling, at least, feels Hermione's actions were justified.

Some have also accused Hermione of being a self-insert for J.K. Rowling[5] and a canon Mary Sue:

It's interesting to note that people start to have issues with Hermione, the best student in her year, who is pretty, can make an international Quidditch superstar make fall in love with her, is admittedly like Rowling when she was young, knows everything from obscure spells to Cho's innermost feelings, who is always right and gets away with murder. If Hermione's flaws continue to be perceived as being only bushy hair and an abrasive personality, then the accusations of Hermione being a canon Mary Sue will multiply by tenfold.[14]

While the canon was still open, particularly before the publication of Half-Blood Prince, there were massive ship wars over whether Hermione would end up with Harry or Ron at the end of the series. When Half-Blood Prince and a subsequent interview with J.K. Rowling confirmed Ron/Hermione to be canonical, there was much wank by certain Harry/Hermione shippers.

In fanon, Hermione is featured in a variety of both het and femslash pairings, and could be considered a Little Black Dress of the fandom. She is commonly paired with Harry, Ron, Draco, and Snape in het fanworks, and Ginny, Luna, and Pansy in femslash.

In crossovers she is often active in the Muggle world under cover, and tends to be paired with intelligent male characters; Sherlock Holmes, Daniel Jackson and Tony Stark are typical examples.