Hugo Weasley is a next-gen character in the Harry Potter series, appearing only in the epilogue of Deathly Hallows. He is the son and youngest child of Ron Weasley and Hermione Granger.

Very little canon information about Hugo is known. His exact age is not known, though Deathly Hallows indicates that he is younger than Rose but old enough in the epilogue to have an "animated discussion" with Lily Luna Potter (who is nine in the epilogue). The Harry Potter Lexicon estimates that he was born between 2006 and 2009.

In 2014, an in-universe "broadcast" of the Quidditch World Cup on Pottermore included comments by Rita Skeeter stating that Rose "appears to have inherited her father's unfortunate hair" while Hugo "has his mother's bushy locks". Therefore, the fact that Hugo's hair is bushy is considered canon (or at least Pottermore canon), and some fans interpret the statement to mean that Hugo's hair is also brown like Hermione's—or at least is not his father's and sister's "unfortunate" red colour.[1]

Hugo is the least popular of the trio's children in fanworks.[2]

Fanfiction featuring Hugo often focuses on which Hogwarts house he is sorted into and his relationship with the other next-gen kids.

Hugo is often paired with Scorpius Malfoy. Hugo/Scorpius is the most popular Hugo ship on AO3 by a significant margin,[3] and the pairing has its own LiveJournal community, hugo_scorpius.

He is also often commonly paired with a cousin (especially Lily/Hugo or James/Hugo). Such pairings are are usually considered Weasleycest.

Other Hugo pairings are usually cross-generational relationships. For example, Harry/Hugo is a reasonably common Hugo pairing. 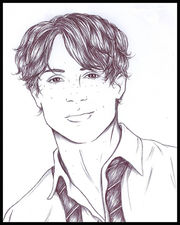