Lily Luna Potter is the daughter of Harry Potter and Ginny Weasley. She was named after Lily Evans, her paternal grandmother, as well as Luna Lovegood, a friend of her parents.

Fans have questioned J.K. Rowling's decision to have Harry name two of his children, Lily and James, after both of his parents, pointing out the possible incestuous undertones.

Fanfiction regarding Lily often focuses on which Hogwarts House she is sorted in. She is often paired with Scorpius Malfoy, though is sometimes paired with Teddy Lupin, in an incest relationship with a brother or cousin, or in a cross-generational relationship. 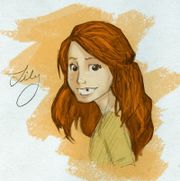