Lily Evans is the mother of Harry Potter in the Harry Potter series. She marries James Potter to become Lily Potter (not to be confused with her granddaughter of the same name)

Lily on the cover of the doujinshi Zero by Choco Box (2007).

Lily is a muggle-born witch, the younger sister of Petunia. A childhood friend of Severus Snape, she repudiates him when he shows Death Eater sympathies and later marries wealthy pureblood James Potter, who is shown to have pursued her since fifth year, though she initially refused to date him. After Hogwarts, she and James join the Order of the Phoenix to fight Voldemort. They are betrayed by supposed friend Peter Pettigrew and both are murdered by Voldemort. Lily's loving maternal sacrifice mysteriously protects her infant son Harry, a protection that lasts until he's an adult as long as he lives with her blood relatives.

Considering how little is known about her, Lily receives a lot of fannish attention. Meta focuses on her relationships with Snape and James, and particularly why she switches allegiance between them. There's also speculation on why her sacrifice protects Harry and discussion of her as a (anti-)feminist character. 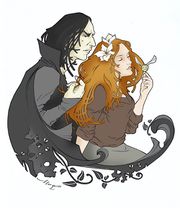 Snape/Lily fanart by Marquise. Despite the artist's intentions to depict Snape and Lily, this art is frequently recced or reposted as Snape/Hermione art: Because not all Harry Potter fan art is photo realistic, fans sometimes confuse Hermione with Lily (and vice versa), particularly where they are depicted in intimate situations with Snape.