J.K.Rowling Official Site was the official website maintained by J. K. Rowling, the author of the Harry Potter series. Among its features, it provided information about the Harry Potter characters and universe that is not provided in the actual books but is still often considered canon.

In early 2012, jkrowling.com was redesigned to advertise Rowling's new adult novel, The Casual Vacancy, and most of the old Harry Potter content was removed. Pottermore serves as a replacement for the old site. 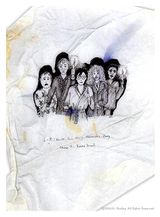 One example of the early drawings by J.K. Rowling that were unlockable on the site. It shows (L-R) Neville, Ron, Hermione, Harry, and "Gary" (later Dean) in an illustration of an in early Philosopher's Stone draft, where the group sneaks out of bed and encounters Fluffy.

With the opening of the revamped site in 2004, Rowling would periodically choose a Harry Potter fansite to receive her Fan Site Award.