The ship first took off after the publication of Goblet of Fire. Madam Hooch's Broom Closet summarized the appeal of the pairing in early 2003, writing that: "The antagonism that we see Hermione demonstrating toward Fleur throughout GoF gets to be channelled into other sorts of feelings."[1]

The publication of Harry Potter and the Order of the Phoenix in June 2003 and its introduction of new female characters drew some of the femslash community's attention away from Hermione/Fleur and onto new ships such as Ginny/Luna.

Mid- to late 2005 saw a renewed interest in the Hermione/Fleur ship.[2] One cause was the publication of Harry Potter and the Half-Blood Prince in July, which featured Fleur in a more prominent role than the previous book and brought her back into fandom consciousness. Although Half-Blood Prince officially canonized the Bill/Fleur relationship, Hermione/Fleur fans were undeterred: Fic writers explained away the relationship as a marriage of convenience, broke the two up, or embraced polyamory or infidelity.

Furthermore, the Harry Potter and the Goblet of Fire film was released in November 2005, and was the first appearance of Fleur on film, portrayed by Clémence Poésy. Although the film includes essentially no interaction between Hermione and Fleur nor hints of their antagonistic dynamic from the book, it reminded book fans of and introduced new fans to the pairing's potential. Many fans were also appealed by the way Emma Watson and Clémence looked together. Icons, photomanips, and other fan art featuring the actors' likenesses are popular.

The fleurhermione community on LiveJournal was founded in December 2005. It is a members-only community and was last active in April 2009, possibly due to the lack of a community moderator to accept new members.

There was also a resurgence of the ship on Tumblr, starting in 2013.[3] Tumblr popularized the portmanteau pairing name "fleurmione". In August 2016, the ship was featured as part of hpfemshipweeks.[4]

Hermione/Fleur is a popular femslash pairing in the Harry Potter fandom, although femslash in general in much less common than het or slash.

As of October 2016, Hermione/Fleur is the most tagged femslash pairing in the HP category on FanFiction.Net, with 149 works.[5] Note, however, that only a small subset of stories on the archive indicate pairings, as the feature wasn't added until 2013. Most of the 944 works that mark both Hermione and Fleur as characters appear to also be Hermione/Fleur. 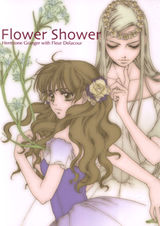 Front cover of the 2003 doujinshi Flower Shower by Sumomonoki.