From Fanlore
(Redirected from Adult-FanFiction.org)
Jump to navigation Jump to search

AdultFanFiction.Net is a multifandom archive founded by Ayla Olsen. It hosts both fanfiction and original fiction and permits both non-adult and adult content. The 'adult' in its name references the fact that users of the archive must be 18 or over. This restriction is enforced via an Age Statement when the user enters the site; writers who are found in violation of this restriction have their accounts and works deleted.

The site started with approximately 100 authors in 2002.

"Adult-FanFiction.Org is not in any way associated with or related to FanFiction.Net." [1]

On August 31, 2013, AFF's URL changed from adultfanfiction.net to adult-fanfiction.org.[2]

Adultfanfiction.net had its origins as a Buffy/Angel archive created by Ayla Olsen and hosted on Geocities.[3] In September 2002 Fanfiction.Net announced that it would disallow NC-17 rated stories. In response, Olsen transitioned her small archive into a multi-fandom archive that would accept the mature content that Fanfiction.Net would not.

At first, the archive was small enough to be run on html. By 2003, however, it was necessary to switch to a different software; the site decided to use a software known as Storyline.[4] The company that made Storyline went defunct in 2005; any future changes to the archive software had to be custom-built by independent programmers. Because of this, it is very difficult for the site archivists to make any changes to the archive software. New features are accordingly slow to be implemented and revealed, and the archive has been unable to implement oft-requested features that archives such as Fanfiction.Net or Archive of Our Own already have. 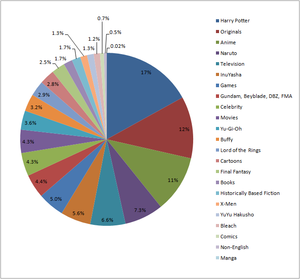 AFF sections by size. These figures are based on the fic counts displayed in the headers of each section of the site as recorded in April, 2010.

Every day, the site went down for approximately one hour so that that day's published works could be backed up. This became known as "Our Daily Moment of Downtime." This occurred around 4AM EST/9AM GMT.[5]

Adultfanfiction.Net provides basic story archiving features: users are able to post their fiction and receive reviews. The site archivists recommend using other methods to make up for common features they can't provide. For example, because there is no way to subscribe to authors, the archivists suggest that authors use Twitter to update their readers when they post or update their fiction. The archivists also recommend that authors make use of the Adultfanfiction.net forums to communicate with readers, since the site itself does not allow replies to reviews or private messaging.

The fic header contains title, author, summary, and publication/update date, as well as rating, chapter, review, and hit count, pairing and fandom tags, and content tags (such as genre, Complete/WIP, pairing type, kink, etc.). However, it does not give the wordcount of the fic, and doesn't allow tagging of characters.

Adult-FanFiction.org consists of multiple, fandom-specific subdomains. The search function only works within a subdomain, so readers will have to choose their fandom before starting a fic search.[6] Additionally, fics can't be sorted by anything but update date.

The ownership of Adultfanfiction.net has changed hands several times over its lifetime. The most infamous change came in 2007, when then-owner Jaxxy disappeared for several months. Four of the head moderators took over, and when Jaxxy returned she accused them of hijacking the site, which resulted in their resignations.[7]