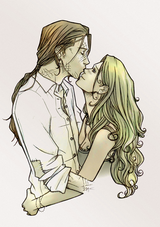 The pairing was first hinted at in canon during Goblet of Fire, when Fleur is mentioned as "eyeing Bill with great interest over her mother's shoulder." In Order of the Phoenix, Fleur has taken a job a Gringotts, where Bill also works, in order to improve her English; Fred Weasley reports that "Bill's been given her a lot of private lessons."

By the start of Half-Blood Prince, Bill and Fleur are engaged, though Ginny and Molly both disapprove of the engagement until after Bill is attacked by Greyback and Fleur stands up to Molly declares that she doesn't care what he looks like. Bill and Fleur get married at the Burrow at the start of Deathly Hallows, and then move into their own home, "Shell Cottage".

J.K. Rowling revealed in post-DH interviews and Pottermore stories that Bill and Fleur go on to have three children: Victoire, Dominique, and Louis.