From Fanlore
(Redirected from Fred Weasley)
Jump to: navigation, search 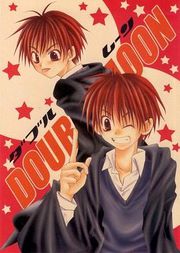 Fred Weasley and George Weasley are characters from the Harry Potter series. They are identical twins and are two of Ron Weasley's five older brothers. The two have a very close relationship in both canon & fanon, to the extent that they frequently finish each other's sentences, appear to have identical interests, set up in business together and are rarely seen apart.