Teasel is an award-winning author, essayist & recommender in The Lord of the Rings fandom, active between 2002 and 2004. Towards the end of 2004, her primary fandom became Harry Potter, where she wrote fiction until around 2006, under the pseuds fictualities & Lydia Bennet. She continued to write meta into 2008, but subsequently left livejournal.

Lord of the Rings

Teasel primarily wrote about hobbits, particularly Frodo & Sam, but has also written about the race of ents. Her fiction ranges from slash-friendly gen to explicit m/m slash, from drabbles to chaptered stories, and from works that Tolkien could have written to Frodo/goat crack. Her writing is known for its originality, its use of symbolism, its luscious descriptions and its delicate pacing. Writing in Crack Van, kraken_wakes describes her as one of the most thoughtful writers I have come across in this fandom – her writing is reflexive and has a stillness to it which is very attractive. Added to this, her ability to weave together vague notes from Lord of the Rings and The Hobbit into a convincing and compelling story easily sets her apart.[1]

Her best-known work in this fandom is probably On Gorgoroth Plain, which was a surprise winner of the LotR category of the inaugural Mithril Awards, and was recommended by gen & slash fans alike. TheFourthVine writes this is the story that made me remember why I read everything I can, just because occasionally I find something so unexpected that it makes all the tripe worthwhile.[2] Heat Wave, a popular Frodo/Sam story set pre-Quest, is discussed by Anna Smol in "Oh...Oh...Frodo!": Readings of Male Intimacy in The Lord of the Rings.

Teasel's LotR writings were formerly archived at her personal website, Amazing Creatures (link; now offline), which also included her hobbit-centric recs and an extensive list of links to archives & Tolkien authors. One of her stories appeared in Cara J. Loup's zine Inside a Song. Some of her fiction is now archived at the teaselfiction livejournal, and at various archives including Archive of Our Own, FanFiction.Net, Henneth Annûn, Library of Moria & West of the Moon. 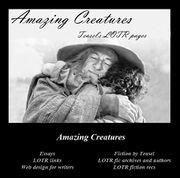 Her HP fiction is archived at the lydiabennet livejournal and at Archive of Our Own & Skyehawke. She mainly wrote Harry/Draco, but her best known work is Changeling, a short dark gen piece that focuses on the Weasley family. Espresso Addict writes This creepy short story slips seamlessly into canon and could easily have been written by Rowling, yet it changes everything. ... One of the more original stories I've encountered in this fandom.[8]

Teasel's essays, reviews and other meta can be found in the teasel & fictualities livejournals. They include detailed character studies, brief essays on visual structuring devices in Peter Jackson's films of LotR,[9] and extensive, erudite essays on topics across fandom, fanfiction, literature, language, writing & journaling.