Bilbo Baggins is the main character in J.R.R. Tolkien's novel The Hobbit and a minor character in its sequel, The Lord of the Rings.

The stay-at-home hobbit is enticed into going on an adventure with Gandalf and thirteen dwarves as their burglar (despite having no previous acquaintance with the trade), which culminates in the defeat of the dragon Smaug. Along the way he chances upon the magical ring of the creature Gollum, which proves useful to Bilbo in escaping his detested relations the Sackville-Bagginses – as well as to Tolkien, in linking The Hobbit to the The Lord of the Rings. At the end of the later novel, he sails into the West with the other Ring Bearers. He never marries; his nephew, Frodo Baggins is his adopted son and heir.

Bilbo is played by Ian Holm in the Peter Jackson films of The Lord of the Rings and by Martin Freeman in the The Hobbit trilogy.

The Ballad of Bilbo Baggins is a 1967 cult song about Bilbo, perhaps all the more popular with fans because it was first performed by Leonard Nimoy (aka Spock). It was included in the Ringers: Lord of the Fans documentary.

For more examples of hobbits in popular culture, see the Wikipedia article.

Bilbo is a much-loved character. Estelanui writes: I have a fondness for Bilbo because is a character complex and simple in the same time. There are so many aspects in this multi-faced hobbit: the adventurer and the facetious person, the confirmed bachelor and the foster father, the scholar and the county hobbit.[1]

Despite this, prior to the release of the films of The Hobbit, Bilbo was not as often portrayed in fanworks as the younger hobbits. Most fanfiction featuring him was gen, and tended to be light, humorous or fluffy. Common topics included his meeting Legolas while in his father's kingdom during The Hobbit or the young Aragorn in Rivendell (neither of which are mentioned in canon), his adoption of Frodo, his penchant for composing comic poetry, and his role as a historian, translator & gatherer of lore. Fanon included his confirmed bachelor status being to do with his possession of the Ring; prior to the films rather little slash existed. 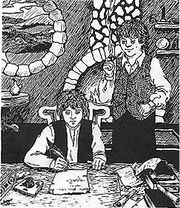 Fanworks for the 2012 film started appearing long before the film's release. Because Martin Freeman, who plays John Watson in Sherlock, was cast as Bilbo, there was a lot of crossover interest for Sherlock fans, resulting in some Sherlock/The Hobbit fusion works. Portmanteau names such as "Johnbo" were used to refer to the John Watson/Bilbo fusion character. After it was announced in June 2011 that Benedict Cumberbatch, Freeman's Sherlock co-star, had been cast as Smaug,[2] portmanteaus such as Smauglock and Cumbersmaug appeared, and a few Bilbo/Smaug stories were posted.[3]

Film-fandom Tropes include courtship stories, which often highlight the cultural differences between dwarves & hobbits, and Mpreg stories, often where pregnant Bilbo is exiled back to the Shire. Genderswap stories in which Bilbo was always a woman have started to appear, which often pair fem-Bilbo with Thorin and tend to draw on romance tropes.

A very common trope in Bilbo/Thorin works is to make Bilbo the Consort of Erebor. (This trope is also sometimes used in Bilbo/Fíli works.) In most of these works, Bilbo Remains in Erebor. Consort Bilbo is often characterized as mixing dwarf culture with hobbit culture, often matching dwarven stubbornness with his own desire to keep to proper hobbit behavior. The dwarves of Erebor are usually very happy to have Bilbo there, but sometimes there is an adjustment period or some non-Company dwarves oppose Bilbo's presence at first. The dwarves of the Dáin Ironfoot's army originally filled this position of objectors in many fanworks; over time the fannish mood shifted in favor of Dáin, so other dwarves, such as the Ironfist clan, took over this role. 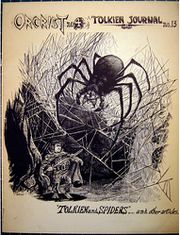 Bilbo & giant spider on cover of Orcrist by Pete Poplaski (1970)