Ringers: Lord of the Fans 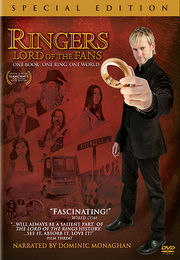 Ringers: Lord of the Fans is a 97-minute documentary film about Tolkien fandom released in 2005. It was directed by Carlene Cordova, written by Carlene Cordova and Cliff Broadway and narrated by Dominic Monaghan.

The film includes Leonard Nimoy performing The Ballad of Bilbo Baggins and includes interviews with the cast of the Jackson films and various fans.