Following the release of the Peter Jackson films in the early 2000s, Frodo/Sam has been one of the most popular and passionately defended pairings in the Lord of the Rings fandom, with some fans asserting that the slash pairing is canon.

Tolkien says very little about the seventeen-year gap between the time when Frodo inherits the Ring from Bilbo and when he leaves the Shire for the Quest. Many, many, many Frodo/Sam fics take place during this period and they tend to be lighter in tone than those taking place during or after the Quest.

Since Sam is Frodo's servant, many slash fics focus on how the two of them overcome the boundaries of class and status. Some writers exaggerate the differences between the characters' speech patterns, making Sam's dialect very strong in order to emphasize his humble background. On the other hand, many fics downplay the master/servant divide and treat the two as friends. A common scene is for Frodo to tell Sam he need no longer address him as "Mr. Frodo".

Sam is frequently the caretaker in hurt/comfort fics in which Frodo is sick or injured, including the taking care of him on the Quest and during post-Quest anniversary illnesses. Such stories run the spectrum from slash to pure friendship. 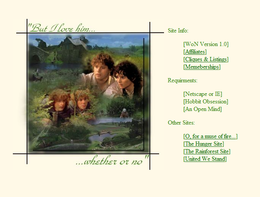 Whether or No archive