skyehawke was an automated archive for multifandom fanfiction and original fiction, which consisted of three divisions: an archive, a forum and a LiveJournal.

On the 22nd of March, 2003, the site changed its URL, and this successful installation signalled the closure of Castle Skyehawke Archives (1994 - 2003). The new URL was automated and, other than one known bug (Microsoft Word HTML files causing strange appending problems), met the objectives first set for Castle Skyehawke Archives: an place for well written fiction from a diverse selection of writers.[1]

This archive is based in Australia. The website runs on Dragon Bulb, "an amalgamation between iodesigns' Storyline version 1.8 and Dragonware's Dragon!Bulb version 1.0".[2]

The Forum was a place for archive users (and the "general public") to interact and chat. As of October 28, 2016, the Forum is not operational but fans continued to occasionally upload stories to the archives.

The LJ Community was first introduced in 2003 to address gaps that would arise when there were website host provider downtimes. It is is mainly an admin site. The last update dated June 14, 2015.

The archive is, of course, skyehawke's main attraction. Fiction can be posted to six main categories: animation/illustrated, book, tv/movie, original fiction, original non-fiction and games/comics. There are generally few rules as to what fiction can be posted, as long as it is "well written". To ensure a level of quality, skyehawke is a closed community. One must be invited by a registered user to get an account. All registered skyehawke users can create accounts, but:

V. We ask that registered users do not invite their best friend, girl/boy/fluffy werewolf they met, strange person down the street (etc) unless said person has previously written a piece of fiction (or non-fiction) that is 'well written').

(a) 'Well written' is not defined because it is a subjective term.

(b) But it would be nice if grammar, spelling and sentence structure was 99% correct.

i. The 1% is because even the best beta readers/spell checks miss a few.

ii. We're not going to actually calculate that 1% error rate - we'll assume it, because, as we said in [I], 'in good faith'.

iii. The Administration Team are very aware of our own fallacies. We ask that we be forgiven for being mortal - especially when we attempt humour and irony and receive fifty emails from those who have missed the point about spelling mistakes.[3]

A distinctive feature of the archive is the use of Fandom Sponsors, users that act as moderators for a given fandom. Sponsors can post news about their fandom and do some maintenance work (like adding or editing characters for their fandom).

A sponsor is simply a member of the skyehawke dot com :: archives who is responsible for championing the category/fandom he/she selects. A fandom benefits from sponsorship in that the sponsor will make a concerted effort to introduce new authors and their story contributions to the fandom, thus growing it.

The concept of sponsorship helps to structure skyehawke :: archives by making each sponsored fandom like a little community dedicated to a specific book/comic/movie/tv show/etc...[4] 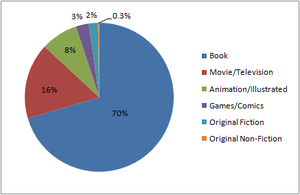 skyehawke was a popular archive for Harry Potter fanfiction[6], but it also offers a home to rarer fandoms, like Ursula Le Guin or Die Hard.

Harry Potter fic by itself accounts for 65% of material on the archive.[7]

Other large fandoms are Stargate, Buffy & Angel, and Lord of the Rings, each of which accounts for about 2%.

All users - whether they be authors/members or readers have the right to complain about anything at skyehawke :: archives. There are special procedures in place however, should a user perceive: Conduct that violates the Code of Conduct Content that violates the Terms & Conditions (please see "3. Content" in the Terms and Conditions)

That a user has abused their power in relation to skyehawke :: archives[8]

In 2005, Australia passed stricter child exploitation laws and the archive revised their terms of service to allow people to challenge fanfic by requesting that the fiction be removed. They created a review board called the "Illiterati." However, the site's revised list of banned fiction went beyond child exploitation and included a wide range of objectionable text including non-con fic between adults written to sexually excite the reader. This caused much confusion.

See Illiterati for much more.