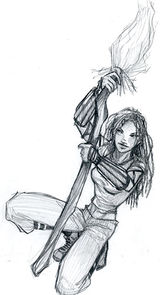 Angelina Johnson is a character from the Harry Potter series, first introduced as a Chaser for the Gryffindor Quidditch team. Angelina eventually marries George Weasley and has two children, Fred Weasley II and Roxanne Weasley.

Angelina is two classes above Harry. She became Gryffindor Quidditch captain in her seventh year, replacing Oliver Wood, and was as hard-working as her predecessor. She was also a member Dumbledore's Army and came back to Hogwarts to fight in the final battle.

Angelina is the only significant black female character in the series.[1] She is described as a "tall black girl" in both Goblet of Fire and Order of the Phoenix,[2] but nonetheless she and her children are commonly portrayed as white—because fans mistakenly believe that her race was not mentioned in the books, or because they choose to ignore Angelina's canonical race for other reasons,[3] for example to allow Fred Weasley II to look identical to his namesake.

Angelina's race is often thought to be a factor in the character bashing and general animosity directed at her in fandom.[4] Some also believe that misogyny in fandom has helped fuel this dislike. One fan writes about the negative backlash to the George/Angelina pairing:

"[T]here is an overwhelming amount of blame ascribed to Angelina for her relationship with George—SHE is the traitor to Fred’s memory, not George for also getting into a relationship with her [...]; SHE is the one using George to replace Fred, while George looking for solace in her isn’t seen as him using her as an emotional outlet; SHE is the one who pushed for the relationship while George was helpless and too overcome with grief over Fred to do anything. I’m sure some people will argue that’s agency, but it smacks of blaming the woman for everything, and then when one adds the Black aggressor vs helpless white victim element, though gender-reversed from usual, it definitely has a racial undertone in addition to the misogyny."[5]

Angelina has also received a large amount of positive fan response. For example, the G.O.A.L. Guild Of Angelina Lovers thread at FictionAlley Park was started pre-OotP, and at least one Angelina fanlisting was active in 2003-2004.[6]

Angelina is commonly shipped with: 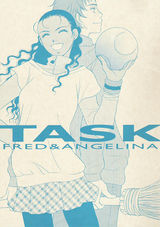