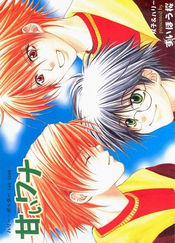 The first volume of Amai Wana was published August 9, 2002 and is Zuihouzakura sixth Harry Potter fanbook. It is 32 pages and is "a twins-centric doujinshi [featuring] Quidditch and their friendship with Harry."[1] 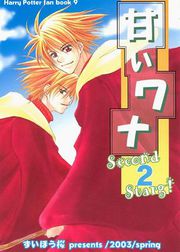 Amai Wana 2 (subtitled "Second Starg!") was published March 30, 2003 and is Zuihouzakura ninth Harry Potter fanbook. It is 20 pages and "features Fred and George in Quidditch uniforms, the sorting hat, and a jealous Ron."[2] It contains some Fred & George/Harry. 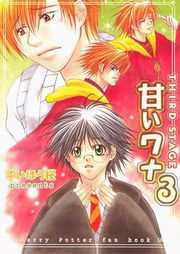 Amai Wana 3 (subtitled "Third Stage") was published May 4, 2003 and is Zuihouzakura tenth Harry Potter fanbook. It is 30 pages and features "Fred & George [...] teasing Ron about his feelings for Harry [and] the return of the biting Sorting Hat."[1]