Charlie Weasley is the second oldest of Ron's six siblings in the Harry Potter series. 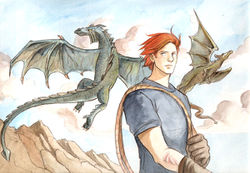 Charlie never marries, and is never mentioned to be dating anyone. He works as a dragon keeper at a sanctuary in Romania and is canonically friendly with Hagrid, who teaches Care of Magical Creatures at Hogwarts.

Many fans speculate that Charlie is gay, though J. K. Rowling said in a post-Deathly Hallows documentary that "[she doesn't] think Charlie is gay, just more interested in dragons than women."[3] Melannen has interpreted this to mean that he is asexual; however there is very limited fanfiction exploring this possibility.[4]

His career is popular with fans; fanfiction often has him working with dragons, and fan art often pictures him with one or more dragons; he's often depicted with a tattoo of a dragon. His location in Romania through most of the novels has the disadvantage of restricting canon-compliant possibilities for interaction with other characters. Perhaps because of this, an unusually high proportion of works feature original characters.