Luna and Ginny were in the same year at Hogwarts, though in different houses; Ginny was in Gryffindor whereas Luna was in Ravenclaw. Ginny seemed to find Luna rather peculiar, as she first referred to Luna as "Loony Lovegood" (though in an affectionate way). The two were very friendly, as Ginny led Harry Potter and Neville Longbottom into her train compartment in 1995, conversing politely with her.

Luna became one of Ginny's best friends through Dumbledore's Army, and Ginny began telling others not to call Luna "Loony," prompting Luna to randomly state during her Quidditch commentary that Ginny was nice and she liked her. Along with Neville, Luna and Ginny led the re-formed Dumbledore's Army while Hogwarts was under Voldemort's control. Ginny was also one of the five portraits—along with Harry, Ron, Hermione, and Neville—that Luna painted and hung from her bedroom ceiling, with the word "friends" joining them together in gold writing.[1]

The first big f/f pairing to come from the release of Harry Potter and the Order of the Phoenix. Who says Ginny's cheerful antics with boys weren't just a cover-up? And, perhaps more importantly, they'd be very pretty together. In any case, this pairing is very hot at the moment.[2]

The "SS Dreamy Redhead" thread was started on FictionAlley Park's SCUSA forum in June 2003.[3] In 2006, Ginny/Luna was the first femslash pairing to be featured in an article on MuggleNet.[4]

Ginny/Luna is a popular femslash pairing in the Harry Potter fandom, although femslash in general in much less common than het or slash. 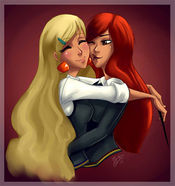