Sirius Black is a character in J.K. Rowling's Harry Potter series. He is Harry's godfather.

Sirius Black was born to a pure-blood family. His parents, Walburga and Orion Black, were firm believers in blood status and tradition. When Sirius was sorted into Gryffindor and became friends with James Potter and the other Marauders, he quickly became an outcast of his family. He, James, and Peter secretly became Animagi while at Hogwarts. Sirius could take the form of a large, black dog. His nickname was Padfoot.

After leaving school, he joined the Order of the Phoenix. When James and Lily Evans got pregnant, they named him the godfather to their son, Harry Potter.

Sirius was falsely accused of murder and was sent to Azkaban, where he spent the next twelve years until his escape in Harry Potter and the Prisoner of Azkaban. He later rejoined the Order of the Phoenix.

In Harry Potter and the Order of the Phoenix, Sirius was killed by his cousin Bellatrix Lestrange.

Sirius Black is a very popular character in the Harry Potter fandom.

Sirius-centric fanworks are often set in the Marauders era, while he was a student at Hogwarts, as well as post-graduation. Stories set after his escape from Azkaban as also popular, especially the Remus/Sirius "Lie Low at Lupin's" trope. Following Sirius's death in Order of the Phoenix, "Bring Back Black" fics, including fix-its and denialfic, were extremely popular. 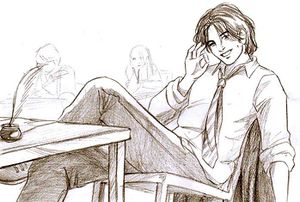 "Sirius Black taking his O.W.L.s" by Marta. Illustration of a 15- or 16-year-old Sirius based on a scene from Order of the Phoenix.