Regulus Black is the younger brother of Sirius Black in J. K. Rowling's Harry Potter series. He joined the Death Eaters during the first war and was thought to have been killed by Lord Voldemort for deserting, though it is later revealed that he died trying to destroy one of Voldemort's Horcruxes.

Regulus was first introduced in Order of the Phoenix, when Sirius tells Harry about the Black family's "pure-blood mania". Sirius believed that Regulus had joined the Death Eaters but later tried to back out and was killed on Voldemort's orders. In Half-Blood Prince, Harry and Dumbledore found a fake locket left in place of one of Voldemort's Horcruxes; inside was a note signed "R.A.B." that stated that its author had discovered Voldemort's secret and had stolen the Horcrux to destroy it. Despite not yet knowing Regulus's middle name, fans were quick to conclude that Regulus was the "R.A.B." in question.[1]

It was confirmed in Deathly Hallows that Regulus had been the one who had stolen the locket, and that he had died in the process. Other details about Regulus were also revealed, such as that he had played Seeker for the Slytherin Quidditch team and joined the Death Eaters when he was only sixteen.

Initially, Regulus was generally interpreted by fans as arrogant, prejudice, and (based on Sirius's comments about him deserting the Death Eaters) cowardly. However, some fans portrayed him sympathetically as a product of family's toxic influence, and interpreted Sirius's bitterness when discussing him as an indication that they may once have been close.

Regulus's appearance was never noted in canon until Deathly Hallows, when he was confirmed to have dark hair and a "haughty look" like Sirius, though was smaller and less handsome. Before then, he was sometimes depicted as blonde in fanworks, like his cousin Narcissa (often to draw parallels between Regulus and Sirius and Narcissa and Bellatrix).[2]

After HBP and especially DH, Regulus began to be interpreted positively by the majority of fandom. Discovering Voldemort's secret (and knowing what Horcruxes were) suggested that he was intelligent, and defying Voldemort and stealing the Horcrux showed him to be brave. Additionally, it was revealed that Regulus has sacrificed himself rather than make Kreacher drink the poison to retrieve the locket, a fact which endeared him to many fans. 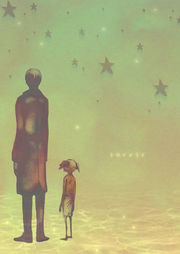 Front cover of Träumerei, a doujinshi by Himegusuku. Regulus and Kreacher.

Themes and Tropes in Fanfiction

Stories about Regulus usually focus on his relationship with his brother or parents, or about his retrieving the Horcrux. He often has a supporting role in Marauders-era stories. AUs or pre-DH fics where Regulus had not died but had instead gone into hiding are somewhat common as well.

Most Regulus pairings are slash, though there are a small selection of het pairings. Popular pairings include: