Maya was an influential fan in the Harry Potter fandom who was active circa 2001-2008. She is the author of at least two dozen fanfics, most of which center on the characters of Harry Potter and Draco Malfoy and the Drarry ship, but not exclusively as a romantic paring.

Maya has retired from fannish life since she is embarking on a career as a profic writer. (See Fans Turned Pro.) All of her fanfiction was taken off the Internet on November 6, 2008.

Underwater Light was her seminal work, posted over the course of three years from May 2002 and July 2005, at the height of Harry Potter fandom activity. This was concurrent with the Three-Year Summer and concurrently with parts of Cassandra Claire's epic, The Draco Trilogy. Along with Cassie Claire's LeatherPants!Draco, Maya's interpretation of Draco in Underwater Light and her other early works has had a huge influence on his characterization in HP fanfic at large. One reviewer writes:

I have to say that Underwater Light has been one of the fics that has most shaped the face of fandom for me. It's had me hold my breath at times, in tears at others, and busting a gut with absolute laughter at others. If anyone ever wonders who made me look at Draco quite so differently than how JKR portrays him, the answer is Maya.[1]

Maya's popularity rose steadily since then, and evidence for her renown can still be seen in desperate posts by fans begging for copies of her fanfiction years after it disappeared off the internet.[2][note 1][note 2]

Many fans were upset by the removal; some were sympathetic to her reasons, but some were not.[note 3] It was the subject of a Fandom!Secrets graphic in 2009.[note 4] At one point Maya's professional LiveJournal was hacked, and it was suggested that the ones responsible were fans who were angry about the fic removal.[3] When she posted a pdf of "The Complete Works of Maya"[note 5] in 2008 just prior to taking everything down, Maya requested that no one who downloaded a copy give it to anyone else; instead, fans who had lost the files or received the news too late should ask her directly for a copy.[4] She also specified that no one who hadn't read the stories already should gain access to them in the future.[note 6] Some fans respected her request; some did not. Much later, fans reported in various livejournal comments that she no longer had copies of her fanfic (or possibly had deleted the pdf), and as of 2011, at least one fan was advised specifically against contacting her for the pdf.[2] There is an underground trade in her stories via email, and the pdf had been available on Megaupload before the site was shut down.

Her novel Underwater Light received attention outside fandom when it was listed as one of the top four "must read" Harry Potter fan stories by Time magazine in the summer of 2011.[5] 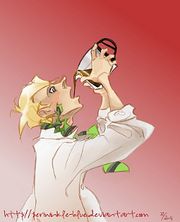 drawing by periwinkle blue inspired by Maya's depiction of Draco as a coffee addict.[6]

Although Maya is usually characterized as a Harry/Draco writer, several of her major works feature other pairings (Harry/Ginny, Draco/Hermione, etc.). However, her detailed descriptions of Draco Malfoy betray an obvious affection for this character. Maya's version of Draco has evolved in terms of his appearance (from impossibly attractive to rather funny-looking), but has a number of identifiable features that have little, if any, association with canon. He is

Note: These stories are now offline. In accordance with the wishes of the writer, no links to Google caches, etc., are listed here.[7] Sorted in chronological order:

Most, but not all, of Maya's stories were eventually collected in a 2605-page pdf file and distributed by the author shortly before she took all the stories offline. Because no table of contents was included in the original pdf, various fans have posted unofficial tables of contents to help readers.

Much fan art has been inspired by Maya's stories and can be found on the story's article page. Below is a small sampling of fan art for stories that do not yet have their own article pages. Once the page has been created, please the images to the article page.