Remus Lupin is a character in the Harry Potter series. He was Harry Potter's professor for a year and was one of the Marauders during his school years. He is a werewolf.

Lupin is introduced in Prisoner of Azkaban as the Defense Against the Dark Arts professor for the year. It is later revealed that he had been best friends with James Potter, Sirius Black, and Peter Pettigrew when they had attended Hogwarts together, and that he is a werewolf.

In Deathly Hallows, Remus marries Nymphadora Tonks and the two have a son, Teddy Lupin. Remus and Tonks both die in the Battle of Hogwarts.

In the movie, Remus Lupin was played by David Thewlis, though before he had been cast, many hoped that Ralph Fiennes would be cast for the part. (Fiennes was later cast as Lord Voldemort.)

Thewlis added a few things to Fanon: a love for Jazz music and a mustache. He was also much taller than both Alan Rickman and Gary Oldman, and so many writers write him as being taller than both.

Remus Lupin fanfic tends to focus on his issues as a werewolf.

Favored time periods include his Hogwarts years, First War, the period of time between James and Lily's deaths, his year as a professor at Hogwarts, Second War, and Post-war (which can sometimes mean afterlife stories).

Many fic tend to focus on him removing himself from the Wizarding World in hopes of making a better living that way, or trying to find a way to afford Wolfsbane Potion.

Some fans have used the idea that Remus inherited a small cottage from his folks, and still lives there on occasion, though it is often small and/or rundown. Usually this is the home he grew up in, and many fans have placed it somewhere in or near Wales. It is sometimes called "Lupin Lodge".[2] On Pottermore in 2013, Rowling confirmed that Remus did canonically live in a "tumbledown, semi-derelict cottage in Yorkshire" before he came to Hogwarts as DADA teacher, though this was likely not his childhood home.[3] Lie Low at Lupin's fics often make use of the Lupin Lodge trope.

In Prisoner of Azkaban, Remus has chocolate on hand to give Harry and his friends to treat the effects of the Dementors. Some suggest that he always carries around a bar of chocolate with him, not for help with Dementors, but because he loves it. This popular fanon might have come about because of The Shoebox Project's popularity, as in that fic, Remus loves chocolate.

This popular fanon trope possibly also stems from The Shoebox Project. It's worth noting that canonically, werewolves in human form are indistinguishable from other humans, so werewolves would likely not have a remarkable feature such as golden eyes in human form.

A popular theory was that Remus may have been Harry's father. Before the revelation that his middle name was John, some guessed the J might stand for James, and believed that somehow he was Harry's father, or that James Potter and the true Remus had switched places the night of the attack, and he was now stuck in Remus's body.

The theory that the "Remus" who appeared in Prisoner of Azkaban was in fact James Potter was popularized by the book Ultimate Unofficial Guide to the Mysteries of Harry Potter, published in early 2003,[4] and was much discussed and debated in fandom.[5] The theory became so widespread that it was debunked by J. K. Rowling in the FAQs of her official website in late 2004. Rowling called it an "ingenious theory", but wrong: "James would never have saved himself and left his wife and son to die."[6]

A related theory was that Remus himself was Harry's true father all along, unbeknownst to James. (This took Severitus-type explanations as to why Harry would look so much like James if he were not his biological son.) 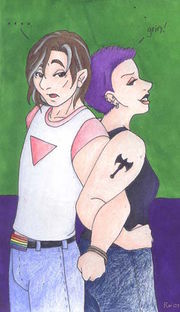 Gaytastic by rachelillustrates (a.k.a. Comet-hime) (2005) – Fanart of Remus and Tonks sporting a number of LGBT symbols: Remus has a pink triangle on his t-shirt and a rainbow flag belt buckle, and Tonks has a labrys tattoo on her upper arm. The artwork was created as a reaction to Harry Potter and the Half-Blood Prince and Remus/Tonks becoming canon.

Some fans expected or hoped that Remus would be canonically gay.

In addition to some fans' interpretation of an implied closeness between Remus and Sirius, one reason that fans interpreted Remus as "queer-coded" is because the stigma Remus faces in the books for being a werewolf is a deliberate metaphor for the stigma attached to HIV/AIDS. J.K. Rowling discussed this at the Harry Potter Lexicon Trial in 2008:

I know that I've said publicly that Remus Lupin['s lycanthropy was an] H.I.V. metaphor. It was someone who had been infected young, who suffered stigma, who had a fear of infecting others, who was terrified he would pass on his condition to his son. And it was a way of examining prejudice, unwarranted prejudice towards a group of people. And also, examining why people might become embittered when they're treated that unfairly.[7]

Many fans were disappointed by Remus's relationship with Tonks in Half-Blood Prince and Deathly Hallows, and felt that the relationship felt forced and heteronormative. Some were further disappointed by Rowling's declaration on Pottermore that Remus "had never fallen in love before [Tonks]," which in some fans' eyes precluded the possibility of prior same-sex ships like Remus/Sirius.[8] For example Aja wrote in 2015 that she was "still angry about remus lupin’s entire character arc being written and structured as a very obvious, very important metaphor for the AIDS epidemic and a lesson against homophobia[,] only for JKR to retroactively de-gay him at her convenience by emphasizing his lifelong heterosexuality".[9] In a response to Aja's post, mutantwanda added that even though she shipped Remus/Tonks, she was still disappointed by canon because "the romance was developed in a way that actively pushed back against queer interpretations of either character."[10]

However, others do not see the Remus/Tonks relationship as a refutation of a queer interpretation of either character, and believe that a queer reading of Remus's character is still strongly supported by canon. For example, Tumblr user rereadingharry writes:

Even though any person, regardless of orientation, can contract HIV/AIDS, it has been inextricably associated with gay men, and, as an author, if you were writing about lycanthropy as an HIV metaphor, you might write a relationship between the werewolf and another man [read:Sirius] in a way that is ambiguous, but possibly romantic, in order to guide the sensitive reader to that interpretation and then, later, if you wanted to explore the struggles of paternity, have him begin a relationship with a character who presents in a very queer way (and has the magical ability to transform her body at will yet never uses this magical ability in a way that is important to the story) so as not to erase his queerness. At least, that’s how I make sense of it all.[11]

David Thewlis, who portrayed Remus in the films, has stated that he and Prisoner of Azkaban director Alfonso Cuarón thought that his character was gay. In 2007, CityNews posted an article and video of David Thewlis stating that Alfonso Cuarón "had the idea that Lupin was gay and he described my character like a 'gay junkie'."[12] In 2011, Thewlis also stated that Cuarón "without J.K. Rowling's knowledge, told me that I [Lupin] was in fact gay", and that he therefore played Lupin "rather gayly, for quite a long time."[13]

Cuarón first publicly referred to Remus as gay in a 2004 interview, when he described him as "your favorite gay uncle who does smack". These comments generated much fannish excitement and lead some shippers to declare Remus/Sirius "canon by Cuarón".[14]

Modern werewolf fiction usually depicts werewolves as being vulnerable to silver, especially silver bullets, which is sometimes described as the only way to kill a werewolf. It was thus prevalent fanon that silver would burn or otherwise negatively affect Remus.

When Peter Pettigrew, a.k.a. Wormtail, receives a magical silver hand from Lord Voldemort in exchange for the one he chopped off, many fans theorized that the silver hand itself would kill Remus, that it was designed by Voldemort specifically to be fatal to Remus, or that it was symbolic of the fact that Wormtail would be the cause of Remus's death in another way.[15] This theory was especially popular after Sirius Black's death in Order of the Phoenix, when many fans (correctly) predicted that none of the Marauders would survive the series.

When asked in a 2005 interview, Rowling confirmed that Wormtail would not kill Lupin, although it showed "good knowledge and a good imagination to think of that".[16] Deathly Hallows came to show that Wormtail's silver hand was relevant only to Wormtail's own demise,[17] and on Pottermore, Rowling wrote that silver bullets do not kill werewolves in the Harry Potter universe.[18]

Remus is most frequently paired with Sirius Black, both during their Hogwarts years and after his return from Azkaban (Lie Low at Lupin's). See Remus/Sirius. Sometimes called Puppies or Wolfstar by fans of the pair.

His other most common Slash pairing is with Severus Snape, focusing both on their school years as well as after his return to Hogwarts to teach there. The pairing is commonly called Snupin.

In Het stories, he is often paired with Nymphadora Tonks, which gained reasonable popularity even before the ship became canon. See Remus/Tonks.

He is also commonly paired with Hermione Granger, sometimes as a schooltime crush, sometimes post-Hogwarts, though these stories have become far less common since the final book. See Remus/Hermione.

Remus/Lily is also common, usually taking place before Lily Evans got involved with James Potter, though not always. It is also common for Remus to harbour unrequited feelings for Lily, or feelings he never acted on due to James.