The Remus/Sirius pairing became popular with the characters' introduction in Prisoner of Azkaban (PoA) and remains one of the Harry Potter fandom's most popular slash ships.

After the release of Goblet of Fire (GoF), one common trope of Remus/Sirius fanfic was Lie Low At Lupin's fic, in which Sirius goes to stay with Remus as Dumbledore suggests he do at the end of GoF. After this, Remus/Sirius was so popular as a secondary pairing in e.g. Harry/Draco fics that it was sometimes taken as a given, and wasn't always listed in the header.

With Sirius's death in Order of the Phoenix (OotP), the pairing became canonically doomed, but, if anything, only gained in fannish popularity. The pairing developed two main genres, one centering on Remus and Sirius as students at Hogwarts or shortly after leaving school (often called Marauders-era fic), the other on their reunion and time together before Sirius's death. Remus/Sirius denialfic AUs in which Sirius survives were also common in the wake of OotP, as were "Bring Back Black" stories in which Sirius somehow returns from the dead.

Some fans hoped Remus and Sirius would be revealed to be canonically gay. While suggestions that Remus/Sirius was a canon pairing were often meant jokingly, some fans argued that the Remus/Sirius subtext, especially in OotP, might be deliberate (their joint Christmas present to Harry was often mentioned).

The article Harry Potter and the Secret Gay Love Story, which contains reflections on this period in the fandom, says:

One of the definitive works of scholarship to come out of the summer of 2003 was a 7,800-word essay titled “The Case for R/S,” posted on LiveJournal by a British schoolgirl writing under the name elwing_alcyone. “Current mood: jubilant,” the essay begins (opening with one’s “current mood” was LiveJournal house style, the equivalent of the MLA header), and then proceeds to track, cite, and analyze every mention of Sirius and Lupin in the entire series. At one point she counts the lines of text that appear between two phrases: “Lupin’s eyes were fixed on Sirius” and “said Lupin quietly, looking away from Sirius at last.” The number is forty; Lupin stares at Sirius for forty lines’ worth of plot action. “JKR didn’t have to write that in,” she gushes. “I can’t think of any other examples of one character spending so many lines simply looking at another.” Current mood: jubilant, indeed.

It’s easy to forget how fully we trusted Rowling back then, how total her authority appeared when the series was still in progress and its ending known only to her. In those days, we were Talmudic scholars and she was God. “The Case for R/S” still holds up as a stunning achievement in Potterian exegesis, but what’s striking about it now is its unwavering faith in “JKR” and her control over her material.

Lupin, who was staying in the house with Sirius but who left for long periods to do mysterious work for the Order, helped them repair a grandfather clock …
OotP, p110, UK; p118, US

“Why?” elwing_alcyone writes at the conclusion of her essay. “Why has JKR left it so open-ended? She could have sunk this ship in a sentence. She didn’t, and now, the odds are that she won’t.”

The revelation of a romantic relationship between Remus and Nymphadora Tonks in Half-Blood Prince (HBP) caused a great deal of controversy in Remus/Sirius fandom. Some fans argued that this new canon made the Remus/Sirius pairing impossible[4], some felt that both pairings were possible[5], and some denied or hated the Remus/Tonks relationship. [6] After Remus/Tonks became canon, it became more common (but not universal) for Remus/Sirius fans to depict Remus as bisexual rather than gay. 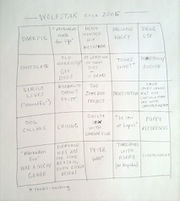 "Apparently everyone is making these now, and I thought it might be a good time to remind all you lucky kids of what the Wolfstar fandom was like way back when. It was a simpler, angstier time. DISCLAIMER: I’ve never really been a Wolfstar shipper, but I’ve been in the fandom for over fifteen years (!) and it was inescapable, so I’m willing to volunteer myself as a fandom historian in this case. Some of these squares have crossover with other ships and with fandom today, but THIS IS YOUR HISTORY."[7]

Initially, Remus/Sirius did not have a predefined ship name or fandom. As with other pairings, abbreviations were used, later smushnames were thought, as well as nautical names -- due to the FictionAlley Park's SCUSA.

Fans who sent the pairing under the nautical name H.M.S Wolfstar had roles, as if it really were a ship -- vessel -- as seen in the signing of Tribble Tater in 2010.[1]

With the creation of the ship name Puppies and its ramifications, the term puppylovers was formed to briefly designate fandom.[citation needed] With the fall of the ship name puppylove in favor of others, so fandom seems to have followed the path of naming itself as shipper preceded by one name like Sirem or another.

The popularity of these names and their period of use varies with different fandom groups, for example in Brazil there seems to be a slight predilection for portmanteau names, in particular Wolfstar. 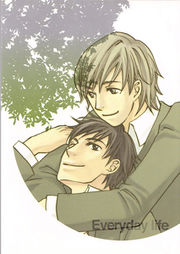 Back cover of Everyday life by Cherry Beans

Wolfstar has had resurgence on TikTok after the popularity of All The Young Dudes and with that has come numerous fan edits of this pairing. For the majority of editors, Andrew Garfield and Ben Barnes are the Face Claims for Remus and Sirius respectively.

Some creators in this space are:

The SBRL mailing list was started in October 2000, and is still active; its associated archive is Wolf and Hound. Other Remus/Sirius archives included Azkaban's Lair, which closed November, 2008.

In 2005, possibly in response to the events of Half-Blood Prince, there was a surge in fannish activity, leading to the creation of Dog Days of Summer. It provided daily prompts during the month of August. Later it was followed by sibling communities Scarves and Hats (October), Blanket Forts (January) and Welly Muck (April).