Sisters of House Black is a pre-series fan film for the Harry Potter fandom. The film focuses on the Black Sisters: Andromeda, Narcissa, and Bellatrix as young adults during Voldemort's rise to power.

The film was funded through an indiegogo campaign and was made on a smaller budget than comparable Harry Potter fan films. After release, the film received generally favorable reviews from both fans and more casual viewers. The film has over 2 million views on YouTube and the various producer-created social media accounts show active engagement from fans of the film.

Sisters of House Black is described by the creators as:

"...Based in the world of Harry Potter during Voldemort's first rise to power. It will follow the sisters Bellatrix Lestrange, Andromeda Tonks and Narcissa Malfoy and will show how the choices they made impacted their lives and their relationship as sisters. Expect a film full of drama, magic and unexpected twists that will make you want to watch it again!"[1]
From the Sisters of House Black on Facebook

As of August 2020, Sisters of House Black has 2,251,738 views and ~90k upvotes on YouTube. While there are some downvotes, the comment section is overwhelmingly supportive.

[pureblood princess]
"underrated opinion : they all nailed the black sisters roles, they're so beautiful like what black family should be."[2]

[Specimen 42]
"You know when the music box started playing at the end, we don't know wether it's Narcissa's love for her sister or Bellatrix's love for the Dark Lord that powered it. This is one of the things that I love about this fanfilm, the attention to detail and small secrets that make it truly about the secretive House of Black."[2]

[Silver17S]
"LOL Bellatrix licking her own blood, that laugh and then: Pure Oh, this is SO amazing. I always dreamed of this perspective to be filmed by I don't care who. Anyone who comes up with this, a young Bellatrix- and of course her sisters and the background story of the House of Black- is a genius! Great acting! What a fan film!"[2]

"20:54
Sirius: Someone kill me, please.
Bellatrix from future: Did you say something brother?"[2]

[Ellie Ameli]
"I love how you’ve captured Narcissa’s moral ambiguity. I think that she’s definitely a “grey” character. I truly believe that the only reason she took Voldemort’s side is because she knew that her family would be safe if she did."[2]

[R Shelhart]
"This backstory would explain SOOoo much about Bellatrix's character. If her good/happy memories were stolen or voluntarily removed, and all that was left was her ambition and darker impulses, no wonder she cracked. It would also explain how she survived the constant, torturous presence of the dememtors in Azkaban for so long, when others didn't. If she no longer had any happy memories left in her mind, they'd have had nothing to feed on and wouldn't have mostly ignored her. I also loved the sister's relationships and their nicknames. Them calling each other, Sissy, Andy and Bella made their interactions seem more like a real family."[2]

The film has a full-page review in the Houston Press newspaper, by reviewer Jef Rouner. The review is very positive, but Rouner does criticize the use of a frame story and smokey pensieve transitions between scenes as a way to cover up poor editing. Two quotes are shown below:

"Speaking of Voldemort, Bob Hurford has a gloriously-sinister turn as the Dark Lord when Bellatrix attempts to join his terrorist cell. He challenges her to a duel, and effect-wise this is where the movie shines the best. Though low-budget and simple, the scene is nonetheless a tense fight that moves with the grace of a tango that frankly outclasses some of the wand work in the earliest of the Potter films. Unfortunately, a three-way duel between the Black Sisters near the end is a much more amateur affair and is one of the few times watching that it felt like an elaborate LARP."[3]

"It’s something more wholesome than that, and while they have fewer resources and talents to pour into it they do pour everything they have to the last drop. Sisters of House Black is clever, sincere, well-acted, and just plain fun to watch. If you ever wondered what a BBC production of Harry Potter would look like, well, here it is. What they lack in movie magic they make up for in a compelling family drama amidst a drastically changing world. The tale of how these three women conducted themselves in the wizarding wars is a potent brew."[3] 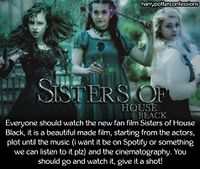 An anonymous confession submitted to the Harry Potter Confessions tumblr. As of August 2020, the confession has over 100 notes with several positive comments.
"Everyone should watch the new fan film Sisters of House Black, it is a beautiful made film, starting from the actors, plot until the music (i want it be on Spotify or something we can listen to it plz) and the cinematography. You should go and watch it, give it a shot!"

[too-much-randomness]
"I watched and let me just say: it’s so good! It really gives more depth to the character we think we’ve known. It doesn’t redeem any characters, just explains them."[4]

[lord-lunatic]
"I don’t know if I’m the only one who didn’t know this but there’s a new fan film coming and it looks AMAZING!!!

It’s about the black sisters and I am shook!

So anyone who was oblivious like me until now: Go check it out!!!"[5]

[Kelly Loomis]
"I watched this twice and the second time put on the closed captions so I could catch all the dialogue. I’m still a little confused but it was a creative back story to explain the sisters and their development into the people they became. I’m wondering if we might get more Black/Lestrange family tree information and characters in the FB movies to come. It was a fun watch."[7]

[fredensborganton]
"This fan-film was one of the best HP fan-films to exist, and that's mainly because adds something great to the HP canon, and this is a fan-film that you want to be made canon. The greatest thing about the fan-film was the depiction of the three sisters. They are all portrayed perfectly and it adds whole new dimension to their characters, especially Narcissa and Bellatrix."[8]

Listing of Cast and Crew