Lucius Malfoy is one of the better-known Death Eaters in J. K. Rowling's Harry Potter series. He is one of the few who escaped being sent to Azkaban or killed at the end of the First War. He is also the father of Harry Potter's school rival, Draco Malfoy. 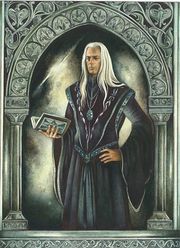 Most Lucius fanfiction focuses on his relationship with his son and/or wife, his Master Voldemort, or has him plotting against Harry Potter or Albus Dumbledore.

Lucius has many ships associated with him, though the most common tend to be with his wife Narcissa (Lucius/Narcissa), his son (Malfoycest), Severus Snape (Snape/Lucius), or Harry Potter (Harry/Lucius).

Other notable partners include Hermione Granger (Lucius/Hermione), Sirius Black (Lucius/Sirius), and Regulus Black (Lucius/Regulus). Lucius/James fic also used to be more common before Order of the Phoenix was released, but has since fallen by the wayside in favor of other pairings.

Lucius's appearance and character in fanfiction and art owes a lot to his portrayal by Jason Isaacs. His hair, which went unremarked but for color in the books, is now assumed to be long. His cane is a favored object by many fans, as is the wand hidden inside it.