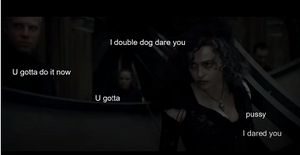 Bellatrix kinda ruining the vibe for two minutes straight is a short comedy vid by The Daggerthoo. In contrast to other fannish video, this vid is mostly focused on comedy over visual effects. Throughout canon scenes, edited white Arial font shows up with comedic comments, like "this scene lowkey makes me stan Voldemort" (in response to a scene in The Goblet of Fire film where Voldemort pushes Bellatrix to the ground). The comments contain a mix of slang and some deliberate misspellings.

The Daggerthoo has posted other similar videos to YouTube and received a generally favorable response. This particular vid has 258,921 views, 11k upvotes, and 1,395 comments.[notes 1]

Another notable technique was a quick title flash (of less than a second) at 0:13 which provided a slightly more critical but equally humorous take on the character.

Oop- ”Bellatrix being a deranged psychopath who feels no empathy or understanding of anyone else’s feeling or circumstance, due tot the dichotimised society between pure bloods and non-pure bloods. She also spent the entire franchise tryna ride voldy’s ........ but eh, you gotta do what you gotta do sometimes ya’know.”

get me the closest emergency service possible, i think I’m gonna die-"[1]

[marvelholicツ]
"You gotta agree Daggerthoo is the only thing making our quarantine better : ))))"[1]

[xohoneybee.]
"funny crap in this video:

"bitch tf" "this is kinda adorable tho i-"
"JEsus save us all"
"potTAH, dam she really channelled her inner draco"
"uwu shiny"
"okay boomer"
"this bitch i-"
"ya yeet"
"never thought id say this but this scene lowkey makes me stan voldemort"
"the faces tho"
"i physically can't-"
"did she just do the uwu face?"
"omg bellatrix is an e-girl"
"she just double-dogged dared you, you gotta do it"
"u a wimp or smthn"
"you lil' bitch"
"tf did she just say-"" [...]

I loved this, this vid just made my whole week"[1]