Model building or model making is the craft of constructing 3D models of fannish subjects. It ranges from Blue Peter style models made out of discarded items such as plastic bottles and egg cartons, through Lego models and papier mache, to professional-looking models using balsa wood & tissue, metal, perspex, and other materials.

The activity was very common in some older science fiction fandoms, and model making is a standard panel at some sf conventions, such as Redemption. Model making is a popular activity outside fandom; many modellers make both fannish & mundane subjects, and display fannish models to a mundane audience.

An early example of this hobby in fiction is the novel The Magic City (1910) by Edith Nesbit, in which a boy builds an elaborate model of a city from household objects then is magically transported into it. Nesbit had previously written at least one article about constructing such models. 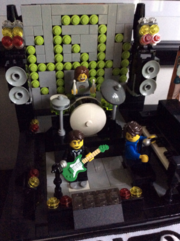 LEGO model of Hanson on stage. Built by Jan Cooney