From Fanlore
(Redirected from Draco in Leather Pants)
Jump to: navigation, search 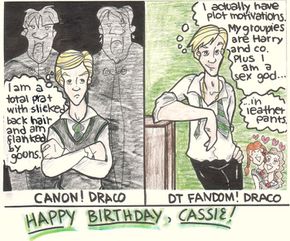 Thus fanon!Draco becomes a Draco who is misunderstood, heroic, smart, witty, snarky, and essentially sexy. This Draco dresses well, is often gay, and very often powerfully attractive, a trait embodied in the creation of specific fandom stereotypes such as Leather Trousers!Draco and Veela!Draco.... And fanon!Draco as a variable has undergone several distinct phases of growth and development since he first appeared as an entity with distinct characteristics. In many respects Malfoy in canon is a cipher, a blank page we in fandom have been writing and rewriting for years. 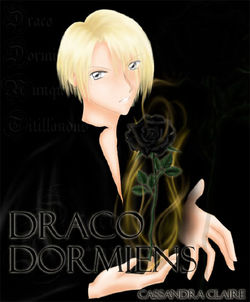 Cover art of Draco Dormiens by Taylor (anael): "Now that I think about it, it might not be Draco on the cover. Die-hard Harry fans can say it's really him. Though scarboy can't make gorgeous black roses, he can only make bird screeches and a few lumpy baby owls. Well, he's also good at making things explode. But that doesn't come til later."

The Draco in leather thing was originally a joke! A joke! At the very end of the first series, Draco Dormiens, I apologized in my author's note to everyone who had wanted Hermione and Draco together, and said "Well, he's better single anyway, now he can go forth and fight evil on his own, maybe in some kind of leather outfit." I meant nothing particular by it, especially since I wasn't planning a sequel series at the time. Well...the email poured in, and I do mean poured in, I was astonished. People sent me pictures of Draco in leather that they had drawn (I've got a collection now) and almost all the reviews for that story and the next one asked for Draco wearing leather. I don't usually cave so easily, but I have to admit it started to strike me as a funny idea. I'm not nearly as good a planner-aheader as Lori is, I tend to write much more off the cuff, so I must say I've taken about as much time dwelling on how on earth to get Draco into leather pants as I have on any other more significant plot twist.
Cassandra Claire [3]

I generally get blamed for the existence of fanon Draco. I think this is not entirely accurate and if you ask flourish, she will tell you there were plenty of people who wrote the kind of Draco I do, before I did. Yes, I recognize that there are a lot of things about his tormented soul and his endless wittiness and his preternatural blondness that are kind of silly. But you know what? There's a place for silly in this world. [...] [A] lot of it is ridiculous, but it's ridiculousness done with a lot of love and whether you want to believe it or not, a lot of love for the canon that inspired it. Alison always says that she feels like people don't understand that I love my story just like everyone else loves theirs; because it's so high-profile it almost seems like it belongs to some Meta Fandom and not to me. People assume that I just Don't Give A Shit. Well, I do. I love my story because it's mine and if I could do it all over again, I would still put Draco in those leather trousers. Because I thought it was funny, and you know what? I still do.

In 2002, velvetrain created a quiz with different Draco characterizations.[5] The description for "LeatherPants!Draco" reads:

Immortalized by the famous "Draco Sinister" (by Cassandra Claire), you are witty, sexy, and the typical bad boy girls love. You are paired with Ginny or Hermione, because they remind the author the most of herself. You have sudden special powers that enable you to go along special Voldie-killing missions with Harry and Co. At first you get on everyone's nerves, especially Ron's, but soon everyone learns to love you. Everyone.

velvetrain. "Which Draco Malfoy are YOU?" [6]

It'll be interesting to see how "Harry Potter and the Half-Blood Prince" is recieved come July.