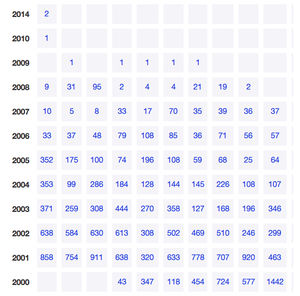 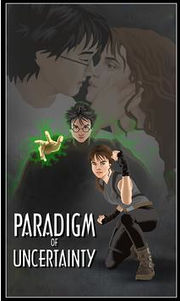 image used on the front page

ParadigmOfUncertainty was a Harry Potter Yahoo! Group originally started for the distribution and discussion of Lori's The Paradigm of Uncertainty.

Besides hosting fan fic, the mailing list offered fans a place to discuss their favorite stories, share their fan art, and generally talk about the Harry Potter characters and Harry Potter fandom events.

In January 2014, the list went into archive mode following an announcement from Lori that she had other places to host her fanfiction, and would be deleting the list shortly. It remained online, but was no longer active.

Almost all posts dated June 23, 2001 on the ParadigmOfUncertainty list have been deleted or screened.

This list is for distribution and discussion of the fanfiction by Lori, author of "The Paradigm of Uncertainty" and sequels. Also archived here as "A Sirius Affair" and "A Sirius Change," by Carole Estes with Penny Linsenmayer.

Volume is variable but normally light. Please be advised that all fanfiction here is rated R and is not intended for the intermediate or young-adult readership.

The unfinished story "The Hero with a Thousand Faces" has officially been retired. I regret not being able to finish the story, but it's just been too long and my interests have changed.

I have posted what exists of the final chapter, with a summary of how the story would have ended, on my blog. You may find it here:

Thank you to all my readers for all their support. [1]

A 2003 Welcome and Overview

Welcome to all the new members. This might be a good time to enlighten the new members about all the stories posted here, so I'll post the summary listed on Schnoogle here:

The Show That Never Ends by Lori (15 chapters)[complete] The Sequel to The Paradigm of Uncertainty January 25, 2008...five months later...

Hero With A Thousand Faces by Lori (7 chapters so far). As Harry and Hermione's wedding day approaches, they have to get to the bottom of the mysterious reapparance in their lives of... Ron?

Penny and Carole's series (2nd fic by Carole alone) (These take place in the PoU universe).

A Sirius Affair (18 chapters) [complete] It's 2001 and Harry and Hermione are struggling to help Sirius Black to regain his freedom in the wizarding community. Things become even more complicated when an attractive muggle enters the picture. Can he risk dragging her into his nightmare? But can he survive the trial without her? Meahwhile Ginny is forced to decide if she can live with all of Harry's secrets... and Hermione, his flatmate. A prequel to Paradigm of Uncertainty.

A Sirius Change by Carole (8 chapters so far) Five years after their marriage, something sinister is happening to the Blacks. Is Sirius really attacking his own family, or is someone setting him up? A mysterious organization is making demands and Cordelia is caught in the middle. Can Sirius and Cordelia come to grips with the changes that result from this nefarious alliance, or will these changes be too much. Draco is working for Sirius in an attempt to help unravel the mystery and Ginny and her business are caught up in the intrigue as well. Takes place simultaneous to Lori's Show That Never Ends, in the Paradigm of Uncertainty Universe. Ships include Ginny/Draco and of course Sirius/Cordelia.

And Cassies Series (is anyone not familiar with her???).

Draco Dormiens by Cassandra Claire (11 chapters) [complete] When an accident in Potions class turns Harry into Draco and Draco into Harry, each is trapped playing the part of the other. Romance, mistaken identities, Really Cunning Plans, evil bake sales, a love triangle, and snogs galore.

Draco Sinister by Cassandra Claire (15 chapters) [complete] When Hermione is kidnapped, Harry and Draco must team up to rescue her from a thousand-year-old evil that threatens the entire wizarding world. Cursed demon swords, love potions, time travel, dementors, flying dragons, Draco wears leather, and everybody dies at least once. Except when they don't.

And if you're still paying attention I'd just like to summarize the way we play here:

That's all I can think of right now, if Cassie or Lori wants to chime in. Our active mods are Cassie, Lori, Carole, Heidi (although she's about to have a baby), and Kris.

Finally, since we do have a bunch of new members and the three of us do take a bit to get new chapters out, would it be helpful to rerun some of the older stories like PoU, and DD, and ASA maybe one chapter at a time once a week? I know I find it easier to read a chapter fed to me through email than to try to sit down and gulp down the whole novel length fic reading on-screen? Cassie, Lori, what do you think of this idea?

ok, I promise not to be so long next time.

In October 2000, Lori announced that the group would also feature the works of Cassandra Claire:

I am very pleased to announce that from this day forward, this mailing list will have two topics: my fic and its sequels/prequels, and the fiction of the illustrious Cassandra Claire, including "Draco Dormiens" and "Draco Sinister" currently playing on fanfiction.net. [...]

Cassandra, it's my honor to share the list with you. Please feel free to give out the address and append it to your posting at ff.net. Maybe we can crack 500 members! (we're up to 458 as of this afternoon) Any discussion of her stories are now as on-topic as they could be. And if anyone hasn't read them, I highly recommend them.[3]

On December 18, 2000, Cassandra Claire posted chapter 9, part 1 of Draco Sinister on ParadigmOfUncertainty. This is the disclaimer for the chapter that eventually led to Cassandra Claire's black listing from FanFiction.Net for plagiarism on June 23, 2001:

Disclaimer: Not mine, JK's. There are quotes in here from Red Dwarf (back when it was funny), Blackadder, Buffy, and I realized I'd criminally neglected Terry Pratchett so far, so made up for it by nicking several quotes in this chapter at once. A/N There's a fair bit of telepathic communication in this story, which is indicated in italics. If you can, read it in Files, where the italics show up. Otherwise, I apologize if it's at all confusing.

This is dedicated to Heidi and Rave, my beta-readers. Schnoogles for both of them. [4]

While the other stories being serially posted at the mailing list were a huge draw for membership, Cassandra Claire's status as a BNF and the eagerly-awaited installments of The Draco Trilogy were a major boost for "ParadigmOfUncertainty."

One example of this was in May 2003. Lori Summers, one of the lists' mods commented:

Well, campers, we've just rocketed past the 6000 member mark! I have no idea why, but over the last 48 hours there has been a HUGE influx of members. Anyone have any ideas? Did we get mentioned somewhere or linked to? Just curious. [5]

hehehe i must be one of those in the influx of members =p cassieclaire's LJ mentioned Chresimos' predictions for what's gonna happen in DV =p she has quite the influence, that ms. claire =p

glad to be here though! i would have never known this group existed otherwise :) [6]

Ah, yes. Well I'd better be visible in the next few days so people know I exist! It's kind of humbling to have people pipe up and say they didn't know who the heck I was, being that they're on a list named after my stories. :-) [7]

Carole Estes, another mod chimed in:

On May 13, 2001 (about five weeks before Cassandra Claire's fiction was removed from FanFiction.Net for plagiarism on June 23), a fan posted that someone was plagiarizing Cassandra Claire's story Draco Sinister. The discussion at that time touched on a number of topics, including the age of the writer, the amount of fiction lifted, the visibility of Harry Potter fiction, the ethics of using quotes from existing canon such as Buffy and Amber, and Cassandra Claire's good-natured forgiving responses sweetened things even further, especially with her promise to post some cookies for the last chapter of Draco Sinister.

On June 23, 2001, Claire's fiction was removed from FanFiction.net for reasons of plagiarism. On June 23, A fan asked: "When I go into fanfiction.net, and click on Draco Sinister and Draco Dormiens, it tells me that the stories aren't there. Where did they go?" Heidi8 answered: "Cassie is aware of this, and Xing has been contacted, but we have no idea what's going on. I did a post in the HELP section of the discussion forums today - add your question to the thread - maybe they'll read it & answer!" [9] On June 25, a fan asked: "I just joined this group, and I'm wondering if someone could do me a favor and tell me what's up with the ff.net boycott thing? I haven't heard the whole story and would like to know what's going on." Claire herself replied: "Hmmm. I'm thinking this sort of thing should be answered off-list from now on....otherwise this topic will never die the death it probably should. I'll answer this off-list." [10]

Note: It is possible that many messages regarding this topic have been removed from the mailing list. The first fan who asked about removal of Claire's fic from FanFiction.net does so in message #9361 on June 23. The next time the topic comes up is two days later in message #9547. There appear to be no messages with numbers in-between #9361 and #9547. [11]

On August 6, 2006, The Cassandra Claire Plagiarism Debacle was published.

Right around this time, Cassandra Claire's stories were removed from the mailing list, as well as elsewhere on the web. The public statement was that Claire had retired from fandom to start her profic career.

There is no apparent discussion regarding the bombshell that was Avocado's expose remaining on the list. It is unknown if fans simply were talking about it there (unlikely) or if messages were not approved to be posted, or removed later. At one point, on August 17th, a fan asked where all of Claire's fiction had gone, and a fan pointed them to a site where they could be downloaded:

Alright, I want to re-read the Draco Series... but I can't find it anywhere! Can somebody please point me in the right direction?

She's put them up on the web in a pdf file for people to download before they go (address below). She sent this message out to her Yahoo group: 'Hi guys, I've removed all my fanfiction from Fiction Alley, because I am leaving the Harry Potter fandom. There was a time I thought I might continue writing fanfiction, but I've realized that my original fiction doesn't allow time for that, and that my paying fiction career has to come first. I'm grateful to all my readers for their support over the years. Because I don't want anyone to be caught short by this (I announced it several weeks ago, but I do realize not everyone reads my blog!) I have created a page that houses PDF versions of all three parts of the DV series here: www.heidi8.com/dt. Feel free to download them so you can have them for the future if you so desire.' [12]

On January 17 2014, Lori announced the mailing list would be shut down because her fanfic had been migrated to AO3:

In the next few days, I will be deleting this group. It no longer serves a purpose, and there are far superior archives for storing my HP fan fiction. [13]

No mention was made of the other fanfic archived on the mailing list, along with the fan art or the accumulated years of fandom discussions. At the time of Lori's announcement, the public mailing list had approximately 18,000 members and tens of thousands of messages.

The list will also serve to announce when new chapters of the featured fics are posted to the main list."