From Fanlore
(Redirected from Tonks)
Jump to: navigation, search 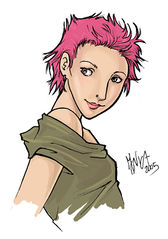 Nymphadora Tonks is a character in the Harry Potter series. She dislikes her given name and goes by Tonks, and her only canon nickname is "Dora," used only by her father, though fanfiction (especially badfic) often uses her full first name or gives her unlikely nicknames.

Tonks is a metamorphmagus, which means she can change her appearance at will. This is a popular topic in fanfiction.

Tonks was a popular character to ship after her introduction in Harry Potter and the Order of the Phoenix. Harry/Tonks was rather popular, as was Charlie/Tonks when fans determined that she would have been in the same year as Charlie at Hogwarts,[1] and, to a lesser extent, Bill/Tonks, especially featuring an evil!Fleur. Remus/Tonks also was a very popular pairing even before the pairing became canon in Harry Potter and the Half-Blood Prince.

She is also a popular femslash character. Some common pairings include Ginny/Tonks, Hermione/Tonks, and Tonks/Fleur.