Frak is a gen multifandom anthology. It has two sister zines, Free Imagination and Amare.

It appears that the earlier issues were originally printed by Blue Jay Press. Issue #4 originally was.

Frak 1 was published in August 1981 and contains 66 pages. It is without artwork and has a pale green card cover.

The zine was reprinted in 1993 by Bill Hupe, but this time with a pale blue cover, and "computer-generated text". This second edition has 62 pages. 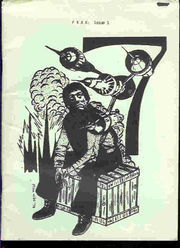 cover of issue #1, the original edition 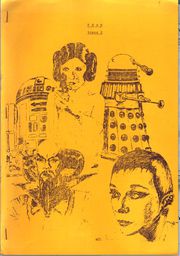 Frak 3 was published in 1983 and contains 46 pages and "Battlestar Galactica" stories written by Orion. 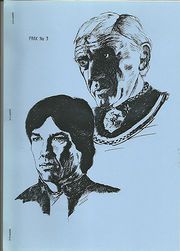 Frak 4 was published in 1983 and contains 53 pages. It was originally printed by Blue Jay Press. 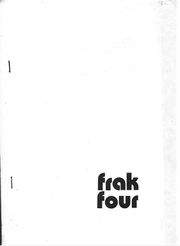 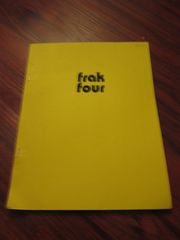 another version of the cover for issue #4 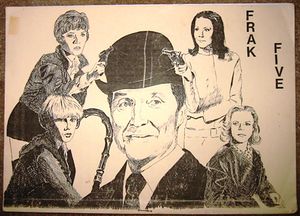 front and back covers of issue #5 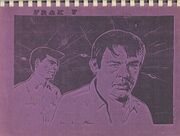 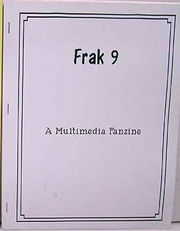 Frak 9 contains A-Team fiction by Janet Ellicott. It has 31 pages. 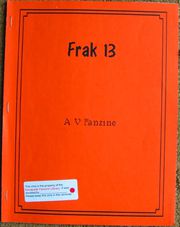 It is a crossover between V and many other fandoms, including Knight Rider, Simon & Simon, The A-Team, Airwolf, UFO, and Superman.

Summary: "What was everyone else doing while Donovan and co were fighting the Visitors? This is the story of what some of our other heroes did while the Earth was occupied by the Visitors. If the fifty Motherships really came, if we did find out what they really wanted and if all our forces were really arrayed against them..." 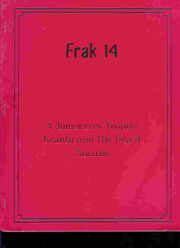 Frak 14 is a 48 page novel called, "Tomorrow’s Children" by J. Ellicott (Beauty and the Beast/Tomorrow People)

Summary: "When the New York Tomorrow People move their base to get out of the reach of Tim Donovan, a sensation-seeking reporter, they discover that there are others who live beneath New York, and that Donovan is also interested in the non-human who lives with them. When Stephen is captured by Donovan, he is forced to share a cage with Vincent and they combine their abilities in a joint escape, But Donovan is not yet finished and Vincent's family need the Tomorrow People's help to rescue him from a second kidnap attempt and to keep Donovan silent forever.

This series of zines, only a couple of issues of which have been received for review, are very well written and enjoyable. This one is based on B&B and a British SF series, "The Tomorrow People," which apparently deals with another secret society, this one of people who have extrasensory powers and who have opened an outpost in the tunnels. A reporter, Donovan, captures both Vincent and one of the Tomorrow People; the rest of the Tomorrow People contrive to rescue both. The reviewer had never seen (or heard of) the series before, but the story makes the basic situation quite plain. The emphasis is on close friendship/love rather than romance/love, but the style is engaging and the characterizations are good. Readers should enjoy this, even though Vincent and Catherine's love is not the main focus.[2] 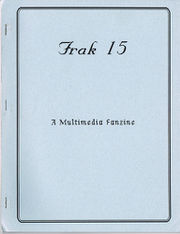 Frak 15 is 28 pages long. It is undated and contains no interior illos.

Frak 16 is 25 pages long and contains the novel "Shadows of the Mind" by Janet Ellicott. (Shadow Chasers/Beauty and the Beast). 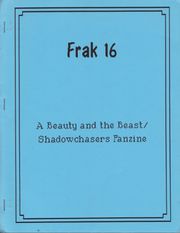 Summary: "Jonathan McKenzie was used to being sent to the paranormal. The paranormal had never sent for him. Until the Army capture Vincent on the streets of New York, and the powers that be decide that an anthropologist who is also a teacher is the person to solve the enigma of what Vincent is."

This issue of the multimedia zine combines B&B with a British series, "Shadowchasers," apparently involving Jonathan Mackenzie and Edgar Benedek (the latter referred to but barely seen), investigators of the paranormalJonathan seems a sort of X-Files anthropologist. He's called in by the US military to help them interrogate their captives, a creature and a boy: Vincent and Kipper. Sympathetic but essentially powerless, Jonathan tries to help the captives, who eventually escape and return to their loved ones.

As with the other volume reviewed, male bonding seems the order of the day rather than romantic love, though Catherine appears briefly. Readable, interesting, and well written, with particular emphasis on the need to be hugged by those one loves when one has been through a hard time. Father's hugs are a lot more important than Catherine's. It's that sort of zine.[3]

Frak 17 is undated and contains the 41-page novel "The Scottish Plot" by Janet Ellicott (Robin of Sherwood).

Summary: "Bored by the enforced inactivity of the Interdict, those who use the church for their own ends find a simple way for King John to conquer Scotland - kill enough of the Scottish royals that John will become next in line. Marion overhears part of the plot and leaves Halstead to warn Robin, while her father rides to Huntingdon. But Robin is not the only one in danger - Guy is also the Earl's son and therefore of royal blood."

Frak 18 contains four Robin of Sherwood stories by Janet Ellicott. It is 44-pages and digest-sized. 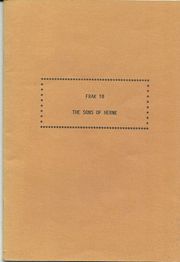 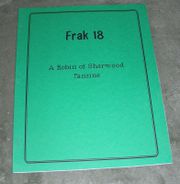 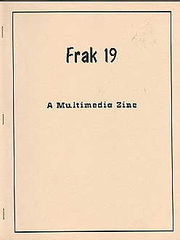 Frak 21 is a a Star Trek: The Next Generation Special. It contains 26 pages. 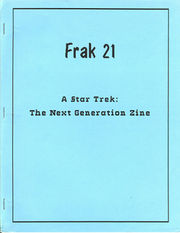 Summary: "A 'High Mountain Rangers' story set around and after the War Games episode. Cody is just beginning to recover from the events which nearly sent him and his father to their deaths, when they are all brought to the surface of his mind again by Larry Rassie's trial. The trial isn't over when an old friend of Jesse's arrives, bringing with him a nephew who has been abused, and a quest to find the boy's brother. Matt commits the Rangers to helping the Sheriff's department catch Thomson but things do not go as planned, and he finds himself not only a prisoner but responsible for his brother's life."

Frak 23 contains a novel called "A Belief Which Will Shape Tomorrow" by Janet Ellicott. (The Tomorrow People).

Summary: "When Adam returns to the island, he finds someone waiting for him, Stephen Jameson, who says he has been a Tomorrow Person for years. Yet there is no time for the older Tomorrow People to train the newcomers in the use of their powers. Someone has found out how to detect a pre-Break Out Tomorrow Person. Children are being kidnapped and forced to steal for their captors, and the Tomorrow People are unable to find them. The Old and New Tomorrow People join forces with General Damon to protect the world from its own children." 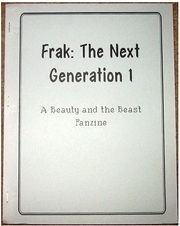 cover 'The Next Generation' of issue #1

Frak: The Next Generation 1 contains "In That Enormous Silence" by Janet Ellicott. It is a Beauty and the Beast 39-page novel.

Summary: "At Winterfest, Paracelsus failed in his attempt to kill Father. He kidnaps Mouse and, while the search parties are out looking for him, goes into the inhabited tunnels to take Father prisoner. He plans to use his captives to bring the others to him, to kill them one at a time. But he has reckoned without the aggressive instincts of Catherine and Jamie, and everyone has forgotten about David, one of the victims of the drug Paracelsus unleashed on the City of New York, as well as Mouse's crazy ideas."

This issue, despite its title, is all B&B. In it a street person, David, has been apparently driven insane by Paracelsus' drug. Now living in the tunnels, he's mute and unresponsive. Then Paracelsus gives him more of the drug and gains a helper who helps him imprison, first Mouse, then Father, in preparation for capturing Vincent and then wreaking his vengence on the whole of the tunnel community.

During their captivity, Father recites, from memory, to Mouse and David a great number of poems. Between a third and a half of this already short zine consists of poetry thus recited. So how much you enjoy this zine will depend on how much you like dissociated but substantial chunks of poetry. Either hypnotized or (contrarily) roused from his drugged stupor by the poetry and Bible excerpts, David assists in the captives' escape and eventually returns to an awareness of his former self— a priest. Not only Catherine but Vincent is pretty much in the background in this zine; the focus is on Father and Mouse, both well portrayed.[4]

Frak: The Next Generation 2 contains 39 pages.

From the publisher, "This zine was a companion to Frak and was intended for the shows which hadn't been shown in the LWT (London) tv area, or for shows which we'd only seen one or two season of. It didn't last very long because Sky became more popular and it was much easier for us in the UK to see American shows." [1]