Lucien LaCroix is a fictional character that appeared in all three seasons of the television series, Forever Knight. The part was played by Nigel Bennett. (In the original 1989 pilot for the series, Michael Nader played LaCroix.) LaCroix is Nick Knight's master, i.e. he "brought him over" or turned him into a vampire. He thinks of Nick as a son, a brother, a friend, an apprentice—and as someone who should respect and submit to his master's perspective on the relative roles of vampires and humans. Their relationship is complicated.

At the end of the series premiere, the two part "Dark Knight", Nick Knight appeared to kill LaCroix; and, through the rest of Season One, LaCroix usually appeared only in flashback scenes to their shared past. (He also appeared as a ghostly hallucination, or in dreams).

The potential of the character led to his being brought back to present-day Toronto, initially in a brief scene at the end of the season finale. In the Season Two premiere, "Dark Knight", he revealed his return to Nick while failing in an attempt to force him to leave Toronto. A few episodes later, LaCroix resumed a career as "the Nightcrawler", a late night host for the local radio station, CERK. In that role, he frequently uttered morbid on-air monologues aimed at Nick, who could not resist listening in. As the season progressed, their relationship became more multi-dimensional. Rather than being limited to an antagonistic role, devising elaborate plots to persuade Nick to embrace his vampire condition, LaCroix was often portrayed as a mentor, albeit one whom Nick could never wholly trust.

In Season Three, when the actress playing Janette left the show, her role as owner of the Raven nightclub was transferred to LaCroix. The alteration, both in characterization of LaCroix and in the depiction of the club, proved controversial with fans.

Not until near the end of Season Two was it revealed that LaCroix had, in life, been a Roman general. During the eruption of Mount Vesuvius, he was saved by his daughter, Divia, who had been turned into a vampire.

As the principal antagonist to the hero down the centuries, LaCroix was immediately popular with fans, although his role in the present-day scenes—usually the bulk of each episode—was perforce limited in Season One. When he returned in Season Two, his popularity increased with the greater exposure. 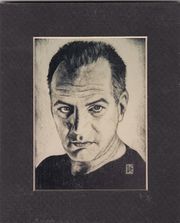 LaCrox in fan art. This drawing is titled After Midnight and is by artist Karen River.

Until late in Season Two, fans knew little of LaCroix's backstory. The episode "A More Permanent Hell" revealed that he had been a Roman general; but it did not give his full mortal name, only his praenomen. There was immediate discussion as to the best way to expand this. Fans generally agree that his nomen should be backformed using the pattern of Latin patrician names, i.e. taking it to be "Divius", the masculine form of his daughter Divia's name. However, a wide variety of cognomina have been given him in fan fiction.

With the knowledge that LaCroix had been turned into a vampire during the eruption of Pompeii, fans immediately treated that date as significant. Annual notices of the anniversary became normal on the ForKNI-L mailing list. In addition, fans invented the notion that vampires celebrate, not their mortal birthdays, but the vampire equivalent—the day they were brought across, which was dubbed their "conversion day". This quickly became fanon.

[LaCroix's] fascination for Nick is his emotional center, his strength as well as his weakness. [...] He's amoral, he abides by a code that he's developed for himself, and yet expects his offspring to abide by an even stricter code that he's more than willing to enforce. There is an incredible sense of loneliness to him; even his own kind are prey, toys to be used and discarded. — Susan Garrett (in an interview with Gwenn Musicante)[1]

There are a number of groups within Forever Knight fandom who focus their interest on LaCroix more than the other characters. These factions interact on mailing lists and groups, write fan fiction about LaCroix, and play as groups in Forever Knight Wars.

The faction of Forever Knight fandom who earliest declared an affiliation with LaCroix were dubbed the "Cousins". They were given this name after an incident in which a list member who was a fan of Nick, Sharon Scott of Texas, admitted to the ForKNI-L list that she had a phobia about frogs. On learning this, two fans of LaCroix sent her gifts of chocolate frogs in the mail. Sharon replied that the two were so cruel that they must be cousins. They averred that, if they were Cousins, then LaCroix had to be their uncle. They promptly dubbed him "Uncle"; and the nickname quickly became common usage among all fans of the character. Other factions arose during War I; but the Cousins came first.

Although theoretically Cousins are attracted to all aspects of LaCroix's character, in practice it is his arrogance and villainy that tend to be admired. Nevertheless, there are fans who prefer to focus on his more humane side, increasingly revealed as the series progressed. This minority split from the main faction to form a "fraction faction", the Light Cousins. Many Light Cousins consider it to be a different faction, and their primary affiliation. A very minor faction, the Figurines, take this approach even further, seeing LaCroix as a father figure to Nick.

The Nunkies Anonymous fly to the other extreme. They consider themselves to be "addicted" to LaCroix, to whom they refer by the pet name "Nunkies" (i.e. Uncle), hence the name of the faction. A large and popular affiliation, they operate parallel to the original Cousins, and have taken separate part in several Wars.

The term Second Cousins has been applied to followers of Lucien LaCroix's "blood kin" (i.e. Nick, Janette, or Divia) who declare a secondary allegiance to LaCroix.

As a popular character, LaCroix has been paired with almost every other character in the show. One of the earliest relationship-based factions is the Unnamed Faction, who pair him with Nick Knight—nominally in any aspect, romantic or otherwise, but in practice seeing a homosexual attraction and writing slash. In reaction, fans who prefer a non-romantic focus on Nick and LaCroix formed the Cousins of the Knight.

After LaCroix met Natalie Lambert in the Season Two episode, "Be My Valentine", many fan were struck with the idea that a pairing between them was also plausible, creating the Valentines faction. The same episode also produced the Faithfuls, fans of the relationship between LaCroix and Nick's younger sister, Fleur, who fell in love in the historical flashback scenes in "Be My Valentine".

The UnSuiteds were invented as a challenge to write fiction slashing the show's most improbable couple, LaCroix and Det. Schanke, Nick's pragmatic, down-to-earth, somewhat stout partner in the first two seasons.

For faction sites, please see the article for the faction.