Knightbeat is a gen Forever Knight fanzine with cover art by Frank Liltz. Knightbeat contains short stories and poetry. It was edited by Barbara Fister-Liltz.

NOTE: It has a sister zine called Nightbeat, and A LOT of people get them confused with each other.

They're 4.25 x 5.5, stapled, about 72-124 pages each, by Fenris House, usually edited by Barbara Fister-Liltz. The cover illustrations are all excellent, and all seem closely based on familiar publicity head-shots. They're almost all short stories, though they do include a few poems. The later issues use a larger Times-Roman font, and tend to be a little shorter; the earlier ones use smaller fonts, sometimes Courier, and tend to be a little longer. In recent years, a very few stories originally published in "Knightbeat" have appeared on fkfic-l; most of the authors, though, I've never seen on-line.[1]

Knightbeat 1 was published in 1993 and contains 80 pages. It contains no interior illos and is digest sized.

NOTE: some issues (all?) are labeled #3 on the table of contents page, so watch out. 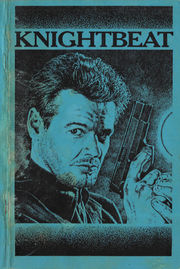 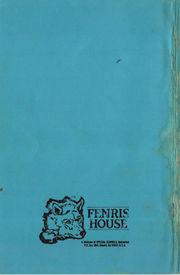 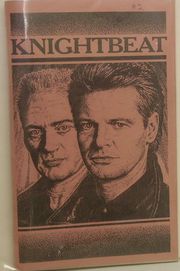 As I lie here in my irritating and quite unwanted solitude, tucked between the decadent beauty of black sheets (with a cheery floral splash tossed in to ease the darkness, naturallyl), I find that I am feeling both whimeical and verbosa. I would dearly love to tell you something scintillating and witty, but alas, the remaining two brain cells that function are asleep at this time. Thus, you will have to endure my mindless babble, call it a punishment, if you will — knowing you as I do, I am certain if you've not yet committed some act deserving a penance, you soon will. You, my dear, are one of the more consistent delights in my lifel *sigh*

Oh, to be able to tell you that I wait upon my Master's pleasure — immoral slut that I am — but, you'd recognise the lie for what it was. (Immoral slut that you are!) Still, all is not lost, and we shall find amusement without HIM.

I've decided to take this wonderful, intimate time we're sharing to tell you about a delectable little book that I 've recently acquired I Oh, do be still, this is something that will interest you if you will give me a few minutes.

First, you will simply die for this coverl The Master and that wretched boy he prizes so highly. Now, I realise Nicholas is a pretty child, and I 'm sure he' s a tasty little thing, too, but . . . that attitude! If he were anybody else . . . Well, we know, don't we? Back to the charming volume that keeps me amused in HIS absence. (He's probably hunting down that equally pretty 'replacement' I've been reading about, but I am getting ahead of myself in my agitation.) Let us begin at the beginning, n'est-ce pas?

ANOTHER PLACE & TIME: An arresting opening piece. This Gabrielle Sinclaire is a rather unusual harlot, but clearly just another trashy tidbit for the Master's insatiable hungers. Still, I suspect this creature will be around for some time yet, he appears to have a purpose in mind for her! Poor Nicholas, if he would only come to his senses and put an end to this tiresome game he plays. Perhaps all our nights could be more pleasantly spent with this annoying impasse behind us? Ms. Sinclaire seems a willing servant to this edict. Does HE have this affect on all of us, or just those with the good sense to appreciate his. . . ah . . . talents? (That bears further thought, does it not?)

POETRY: They've included some divine bites of poetic whimsy. This Gillian Truscott clearly recognises a truly magnificent inspiration! Her "Lover" gave me a delightful shiver, followed swiftly by a pang of loneliness. (I will not indulge in the choice words that pervade my mind at this moment! I do not suffer HIS absences at all well, some nights.)

SYDNEY'S TALE: An amusing view. The temperamental feline had best be careful in future. Our Nicholas is a noble child, but he is what he is — and the cat is no match for the wolf! Arrogant little furball that he is, this Sydney may yet become a savoury appetizer! Of course, explaining this 'accident' could present a few awkward moments/ and the silly creature who tends to the hairball will undoubtedly be most upset, but . . . (These are the risks one takes when allowing the Knight to become part of one's life!)

HEARTSTRONG: I found this an intriguing slice of Nicky's chosen life. The lovely cat-owner is somewhat enamoured of our errant knight, isn't she? And he with her. The Master will not be at all happy with this turn of events. (HE has been so irritable of late, what with his injuries not entirely healed and his mind in frequent disarray. Still, what HE doesn't know and all that . . .) It is so nice to see that Nicholas still pursues some of the more artistic aspects of his long life. The song is lovely, Nick. I hope she appreciates this time you have for her, because once you-know-who gets his shit together these romantic interludes may have to be set aside in favour of other more pressing things — like continued survival I (As I said, HE is so irritable of late . . .)

BLOOD GAMES: A truly sick mind is at work here. Either that, or the Master has found a new hobby he has not shared with the rest of us. What a deliciously depraved reminiscence. But why the pen name? Why does he not simply speak for himself and let the chips fall where they may? I do not understand. But, as he is so fond of reminding me, it is not my function to question HIS reasons. (come to think of it, his Royalness hasn't exactly been forthcoming about just what it is I am supposed to do for him?)

MORE POETICS: This Pam Jensen person has a fascinating, ingenious way with words. You will enjoy her. "The Stalker", poor wretch, is no more. And you think the Master has no compassion! Did HE not help his child put an end to this one's mischief? Yet, no gratitude was expressed. No, only great personal injury was bestowed upon HIM for his assistance. (And, let me tell you, HE is so irritable since waking from that night . . . Try living with him! *shudder* It is not always pleasant, I assure youl) "Aperitif"; I love pre-dinner repartee.

THICKER THAN WATER: Another look at Nicholas. A most engaging tale, too, I might add. This Doctor Brittlngton has the same odd notion as the pretty cat-fancier, this desire to cure our Nick of what he is! Such a silly scheme, but it seems to offer him comfort, so we won't deny him his fantasy. Janette, that little vixen, is up to her expected tricks. (A word to the wise, petite soeur, guard your back in the coming months! HE has a debt to settle with you, too.) But, getting back to this story, now; the entire affair had some wonderfully picturesque moments, and poor 'Jean Pierre' — it was not a nice thing that this 'Henri' did to him. But, it ended well. And, I think the lesson was one that will not soon be forgotten.

HERO: An interesting choice of word to categorise one who destroys. But, "men on missions" have always been foolhardy and stubborn in their righteousness. (Perhaps it is a genetic flaw?) Charles was such a one. To have killed without conscience, even when mistaken, is (to my admittedly limited understanding of such things) one of the mortal weaknesses that is least tolerated among any society. Still, this was a most enjoyable tale, and Nicholas, to his credit, did all he could to protect both the mortal he loves, and Janette — whom we all adore, when the truth is toldl I do hope her injury was not serious and she has fully recovered.

SHAKEN, NOT STIRRED: And I was worried about that raven-haired strumpetl She snaps back well, does our Janette. I must admit, this mystery man of hers is quite the enigmatic sort. How does one go about finding him? Forget, indeed!

GENESIS: This is the one I spoke of earlier. Apparently this winsome boy, Peter Caine, is being groomed as a replacement for our Nicholas. The story was most specific in that respect, I assure you. It does tend to make one wonder why we allow ourselves to be so carelessly used and discarded by His Royal Nastiness! (The Master is irrevocably despicable, but I adore him anyway. Such is the way of madness and obsession, I suppose.) The child, Caine, is learning that lesson the hard way, though. I could feel my own skin crawl when Nick dragged the poor fledgling into that horrible church and began to torture him. For his own good, of course. I wonder what this Peter would have responded to that, had any of these heartless saviours thought to ask for hie opinion. A man should be allowed to decide these things for himself, c'eat vrai? (I wonder if this escapade might help to explain HIS mood recently? He is so irritable of late . . .)

Well, dearest, that about covers the expected treats you can look forward to finding in KNIGHTBEAT Vol. II — auch a clever, imaginative title, isn't it? And, not a moment too soon, I might add. I hear his Lordship snarling about some little inconvenience that I am undoubtedly expected to "fix". So much for my plans, cheri — I had hoped HIS foray into the night would put him in a better frame of mind. I get so weary, trying to find new ways to amuse him. It's always the same, he storms in with the scent of fresh blood on his lips and that disconcerting look of disdain in his dazzling gaze. *shiver*

Hmmm ... I may have been wrong about HIS mood, I see. He's stripping out of that incredible cape and tux! My waiting may not have been in vain tonight!! Come now, you cannot possible deny me some benefit to this life of servitude I've chosen? Yes, I definitely misread the Master's mood, he's feeling somewhat playful tonight. I hope you'll understand why this must end quickly. He's already tossed the book and I fear my pen is about to meet a similar fate.

In a moment, my lordl I must sign off.

He is so irritable of late . . . And so divinely wicked! 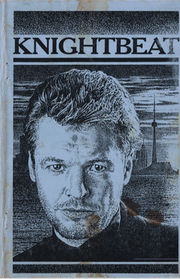 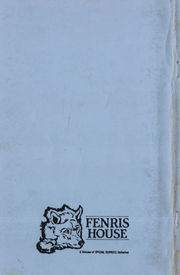 Knightbeat 4 was published in 1994 and contains 84 pages. Cover art is by Frank Liltz. It is digest sized and contains no interior illos. 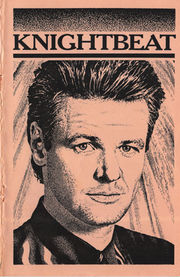 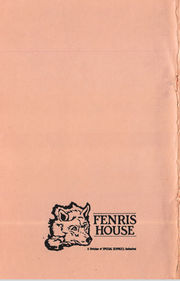 Knightbeat 5 was published in May 1995 and contains 71 pages.

Knightbeat 6 was published in 1995 and contains 75 pages.

Knightbeat 7 was published in 1996 and contains 92 pages. 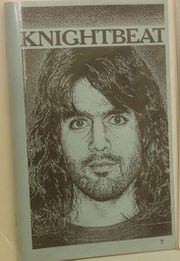 Knightbeat 8 was published in 1996 and contains 84 pages. Cover art is by Frank Liltz. 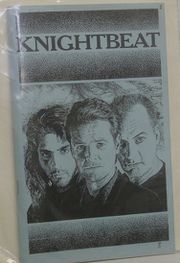 Knightbeat 9 was published in May 1997 and contains 76 pages. 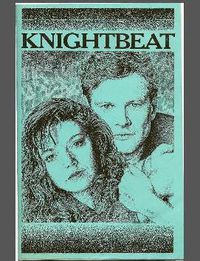 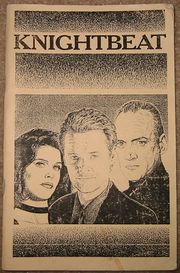