Cousins of the Knight

The Cousins of the Knight (commonly abbreviated CotK) are a Forever Knight fan faction who like a family oriented (non-sexual) relationship between the series protagonist, Nick Knight, and the vampire who brought him across, Lucien LaCroix.

The Cousins of the Knight started out with an e-mail loop, COTK at mylist.net.

The CotK have had two websites. The first debuted in 1997 but was only active for a couple of years. It was replaced in 1999 by a completely new faction site.

Early in 1996, while fans were still arguing vehemently over the best name for a faction for Nick and LaCroix, it became obvious that, even though nominally such an affiliation would cover their relationship in all its variations, the overwhelming majority of the discussion was in terms of a sexual (or slash) relationship. Angie Lotto proposed, therefore, that a separate faction be created for fans of a familial relationship. Shortly thereafter named the "Cousins of the Knight" (a reference to the already existing Cousins and Knighties), its original members were Angie, Margie Hammet, and Texas Jules.

The faction was initially rather small, though it had a mailing list and an eponymous faction site, both run by Angie. A couple of years later, though, her FK interests shifted more towards participation in another faction. She passed the mailing list to Margie Hammet, and stopped updating the website.[1]

The CotK were, however, boosted by new members. For a couple of years, they became significantly more active, taking part as a separate faction in two of the Forever Knight Wars. Considerable fan fiction was written; and this was archived on a completely new faction site, created by one of the recent members, Lisa Harvey.

Although, over the next decade, membership and involvement slowly dwindled (as has, indeed, been true for most of the smaller factions), there continue to be several fans who identify themselves as members of the Cousins of the Knight.

The CotK participated as a separate faction in Wars 10 and 11. Their war posts are archived on their website. For a headquarters in Toronto during war, they invented the Comfy Cottage (actually a rather large mansion with an imitation thatched roof), for which one of their members, Kyer en Ysh created floor plans. 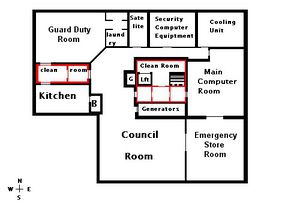 Floor plans of the basement of the Comfy Cottage (from the CotK website), drawn by Kyer en Ysh.

The Comfy Cottage is the virtual home of the members of the Cousins of the Knight fan faction, serving at their headquarters in Toronto during a War. Despite its name, it is more of a mansion, but with a fake thatched roof.

The Comfy Cottage is a two story dwelling, set up to provide a luxurious home-from-home for participating faction members, with a home theatre, a music room, and a hobby room, as well as a kitchen and communal dining room. Besides six bedrooms upstairs for faction members, rooms are provided for Nick and LaCroix. War rooms in the basement include a Council room, guard duty room, and computer room.

The Cotk faction website includes the floorplans for the Comfy Cottage during Wars 10 and 11. These were drawn by Kyer en Ysh. The principal difference is the assignation of bedrooms on the second floor to the participants in each War.

The original logo of the CotK faction consists of two crossed swords on a shield, with a ribbon below that has the name of the faction in French (Les Cousins du Chevalier). The swords symbolize Nick and LaCroix.

It is this symbol that appears on the CotK affiliation pin. It is also prominent in the design of the first CotK faction site.

An updated version of the faction symbol is repeated on the faction's banner, created by Kyer en Ysh,[2] which appears on the index page of their current website.

Although the banner repeats the crossed sword symbol, the two swords are now visually differentiated. An open pocket watch is depicted under the swords, representing the watch that Nick gave LaCroix in the episode, "Father's Day".

The edge of the banner has a band of text. Along the bottom is the name of the faction, while around the other three sides is the motto, "Even when they are trying to kill you, they are still family".

Faction icon for the CotK, created by Greer Watson in 2012.

In 2012, Greer Watson created an icon for the Cousins of the Knight as part of her project to create a set of icons for all the Forever Knight factions. The design composits a screen capture of Nick and LaCroix with a pair of crossed swords (updating the faction symbol) superimposed on a pocket watch (similar to the one on the faction banner).