You may be looking for Code 7, a Starsky and Hutch zine.

Code 47, Level 3, Authorization 10 is a gen War of the Worlds anthology. 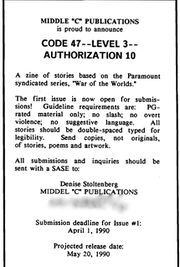 From a 1990 submission request: "The first issue is now open for submissions! Guideline requirements are: PG- rated material only; no slash; no overt  violence; no suggestive language." 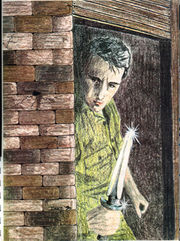 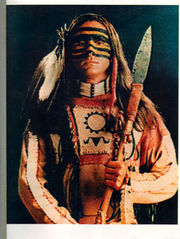 A flyer in The Blackwood Project says that "Two [1] of the stories listed in this zine appeared in Cell-Phase Matching but have been included for the sake of continuity. You have an option, however, to obtain C47 without these stories if you've already read them. Without the two stories, the price is $16.00 Just specify which format you'd like."

Code 47 is a novel by the editor in the form of short stories in the same setting. The main theme seems to be that Paul Ironhorse cannot be happy because there has been so much tragedy in his life, so much that he feels unable to give of himself, and he can't give his love to more than one person at a time. While we all love a wallow, this one has taken the idea to uncomfortable, and wordy, extremes. Throughout the zine there are long, open conversations between Paul and almost anybody else dealing with his feelings and past loves. Some of these go on for many long paragraphs. The Paul Ironhorse I saw on TV would not "spill his guts" at all, or perhaps under very harrowing situations. Look how hard it was in "Vengeance is Mine." I just couldn't believe that he would have those words coming out of his mouth. And the panting, unrequited love for Suzanne was embarrassing.

However, there were some nice sequences in "Lamentations," where Harrison has been lost in a plane crash in the snow. This story relies on adventure for the plot, and not much on the Paul/Suzanne tension. Norton gets work to do and has some excitement of his own. I liked the scene where Harrison is trying to come to grips with the necessity of eating a rabbit he found frozen in the snow.

The writing style is wordy and stilted. Ironhorse's background was improbable and unlikely -- particularly regarding his age during his early (read: young) military career.

I have read a lot of fanfic, as much B7 and WOW as I can find, so this isn't a comparison to professionally published works.

Characters in fanfic should be kept as shown on the screen, or believable explanations for why not shold be made. The Paul and Suzanne in these stories are so wimped-out as to not be believed. The Ironhorse family background reads like a soap opera; likewise, Paul's experiences after his return from a Vietnamese POW camp.

Quinn's Gallery (nice title) has some poetry and artwork by Lana Merkel, Lee & JJ MacFadden, Barb Johnson, and Chris Haire. This section was done very well and the artists have done terrfic work.

Perhaps next time, the editor can be herself edited in the effort to improve her writing skills and to get a second opinion before letting her work see print. [2] 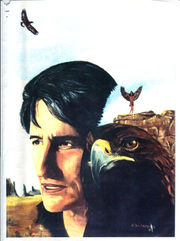 The round robin story, Junior is My Name, was originally meant to be published in this issue, but due to the "graphic description of mayhem," it was published separately. 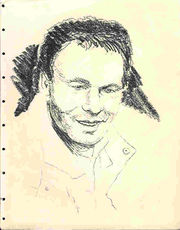