For other articles with a similar name, see Enterprise.

Star Trek: Enterprise (formerly just "Enterprise") was the fifth TV series in the Star Trek universe. It was a prequel, set earlier in the timeline than any of the other series, and intended to show how the United Federation of Planets came to be. It ran for four seasons, from 2001 to 2005, before being canceled.

The show was canceled on February 4, 2005. This launched a massive fan petition to Paramount and UPN. The fannish action ultimately raised over $3,000,000 (three million dollars) for the series’ continuation, but the networks passed.[1] 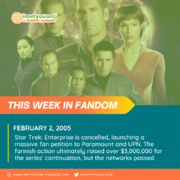 In 2021, Star Trek: Enterprise's cancellation fan petition was featured in I Met You On LJ's "This Week In Fandom History" for the first week of February.

Enterprise was a largely pre-LJ fandom, existing on bulletin boards and mailing lists. In the nature of things, many of the fans followed Scott Bakula from Quantum Leap fandom, came to Enterprise from broader Star Trek fandom, or got involved by playing on centralised fansites such as TrekBBS. The main fic archive was the Warp 5 Complex, which mainly archived fic from the EntSTSlash (created July 15, 2002[2]) and EntSTFic (created Nov 26, 2002[3]) Yahoo! groups. The site has since been exported to the Archive of Our Own

Fansites existed for all of the major actors, as well as a number of the characters; probably the largest and most successful of the latter was the House of Tucker, dedicated to Commander Charles Tucker III and with subsites for three of his most popular 'ships.

A few print fanzines have also been made, but zine publishing is a less popular activity in Enterprise fandom than for the earlier Star Trek series.