Garrison's Gorillas is a TV series from the late 1960s. The premise, like in the movie The Dirty Dozen, is that a group of prisoners use their criminal skills in World War II military missions in exchange for parole at the end of the war, plus an additional six months of time served.

Led by Lieutenant Craig Garrison (nicknamed 'Warden'), Actor (an Italian con man), Casino (a safecracker from New York), Goniff[1] (an English Cockney thief), and Chief (a half-Native American (unspecified), half-white violent offender[2]) penetrated German lines as part of the Special Operations arm of the Allied forces. Off duty, they were housed in a commandeered English manor, and presided over by a Sergeant Major in the British Forces. Garrison was tolerant, though knowledgeable, of his men's lack of military discipline, and made allowances, but not excuses for their temptations. At times, he himself seemed to have more in common with his 'cons,' than he did his fellow soldiers. His creative intelligence coupled with the group's abilities often turned disaster into victory by the end of the episode.

For a show that only lasted one season, Garrison's Gorillas has a widespread, international fandom. Because it was one of the first U.S. television shows exported to China, Garrison's Gorillas (《加里森敢死队》 Jiālǐ sēn gǎnsǐduì) has developed a certain cult status, and was even awarded a Public Security Award in Shanghai.[3] Chinese-language fanvids dedicated to the show can be found on youtube, and appear to be gen ensemble pieces, or single character studies.

Reruns on TV in the United Kingdom revived interest in the show as well, following its cancellation, and some of the more prolific fanzine writers were British.

In the United States, however, GG fandom is small, and the fandom overall has a quiet internet presence.

In the 1990s, a number of fanzines were published. 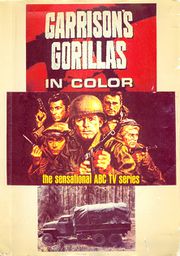 cover of Garrison's Gorillas, a zine with stories by Carole Clemson, published in 1994 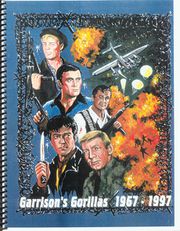 When slash fanzines began to be produced in the 1990s, many fans were cautious about sharing them, even though slash fan fiction had been circulating for decades and the fears often found in early fandoms such as Star Trek and Starsky & Hutch had eased. As one fan remembers;

"For example, there were two versions of a particular Garrison's Gorillas 'zine published. One was gen (which back then was both gen/het with a heavy dose of smarm), and the other version substituted stories or just added the slash scenes to the smarm. If you wanted the slash version, you had to know someone who knew that you were "safe" before it would be offered to you under the table."[4] 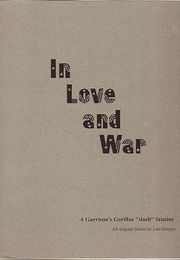 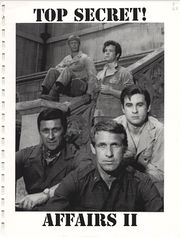 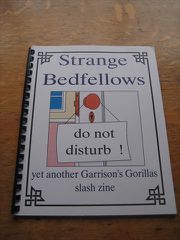