Scorpion Files is a gen multifandom anthology featuring characters who have Vietnam in their background. Although the stories are Tour of Duty, characters from other fandoms appear without: World War II, Miami Vice, Stingray, Equalizer, War of the Worlds and others. Most of the fiction is by Linda Knights. 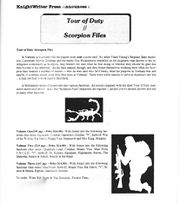 flyer for the first three issues, printed in Monkey Business 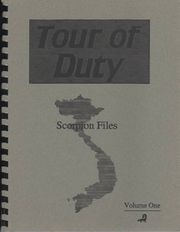 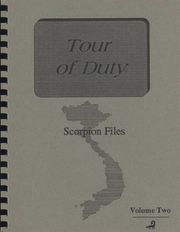 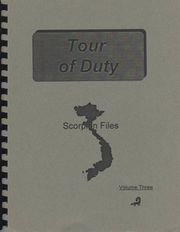 Scorpion Files 3 was published in 1994 and contains 166 pages. The stories are by Lee/Linda Knights and a few by others. In addition to Tour of Duty personnel, stories include Rat Patrol, Garrison’s Gorillas, MacGyver, “V”, Simon & Simon, Riptide, Airwolf, and more.

Scorpion Files 5 was published in 1999 and is 254-page a novel by Linda Knights called, "For Ships That Don't Come In" and a short story by Lorraine A. Scherrer.