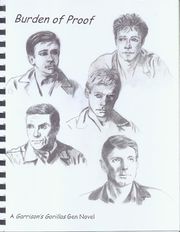 Burden of Proof is a gen 147-page Garrison's Gorillas novel written by a group of writers who called belonged to a fan club. Edits to the novel were made according to majority rule, with one designated editor having final say. The zine did not list the names of the writer, editors or the cover artist to avoid 'ego problems."

From a distributor, Neon Rainbow Press: "The Gorillas' assignment was to stop the theft of French national treasures. As far as they're concerned, they completed the mission -- but there are art objects missing. Colonel Jon Weston is called in to discover if the Gorillas have returned to their old habits, but what he uncovers is a plot to undermine the Gorillas and the Army. What seems like a straight-forward assignment is *anything* but: French resistance fighters, a German SS officer, thieves and a unit of ex-cons all come together in an exciting action mystery gen novel."