Chronicles Annual is a gen Blake's 7 anthology and an annual of The Chronicles. 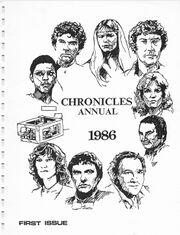 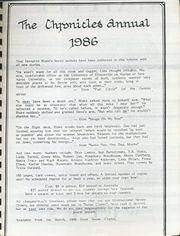 flyer for Chronicles 1986 from the back of Southern Seven #1, click to read summaries

5 good stories, one of which "Strange To Relate" is just hilarious. [1]

Chronicles Annual 1986 First Issue Edited by Susan Clarke and Joanne Keating Card cover Comb binding 180pp. Australian genzine containing eleven stories, poems, an interview with Michael Keating and various drawings. There are two long stories. "Someday, One Day, Maybe" by Moira Dahlberg uses a Terra Nostra background, an old friend (female ) of Jenna's, and a malevolent entity. The story is cogent enough, but its focus is what happens between the non-Blake's 7 regulars so I never felt very involved in it. "Death of a Wayside Flower" is about Vila's life as a young child. I'm not very keen on B7 childhood stories and didn't enjoy this one, though some of the individual sequences are quite moving. It aims to show the trials of life in the Delta domes but lays it on much, much too thickly. There are also some breaks in continuity which are noticeable enough to suggest some paragraphs got chopped by accident. "Full Circle" is part of an ongoing serial featuring clones of Blake, Avon and Cally and has also appeared in Interface 11. Whether you like it probably depends on whether you can relate to the cloned characters. There is a superb story by xBryn Lantry, "Little Brothers" only two pages but every word tells. It has Avon talking to Tarrant after Deeta's death, about his own and Blake's brother and why he and Tarrant do not get on. "Strange to Relate ~ or Relatively Speaking" does a comic hatchet job on stories in which everybody is someone else's long dead brother/sister/clone/parent/child/partner or any combination thereof. It probably goes on a little too long to be entirely effective, but the writer has my full support. [2] 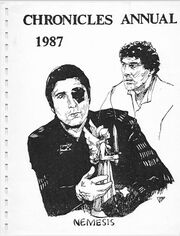 front cover of 1987 by Tricia Ostwald. A fan in 2016 said: "I don’t know what’s happening in this cover. There is no story titled “Nemesis” in the ‘zine, so it’s not about that. I don’t know why Travis is fondling a little statue of what appears to be Athena or a similar goddess. From his face, Blake has no clue either. That’s a, “guys, do you see this? What the hell?” look if I’m any judge. Meanwhile, Travis sort of looks like someone just caught him playing with his dolls again, and is frantically trying to think of an excuse.... #Blake also appears to be a ghost on this cover#considering how the lines go through Travis' shoulder#I just have so many questions about this piece." A fan replied: "Travis won the Oscar for Vengeance?" Another fan replied: "i would guess it’s the goddess nemesis…" [3]

back cover of 1987, Tricia Ostwald 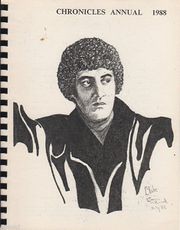 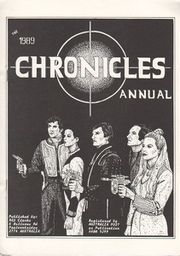