You may be looking for Interphase, a Star Trek: TOS zine.

Interface is a gen Blake's 7 anthology, the fiction club zine of Vilaworld. There are twelve issues. 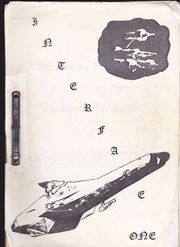 Interface 1 was published in June 1982 and contains 94 pages. 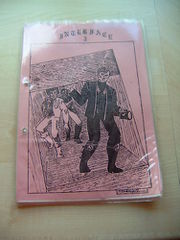 Interface 2 contains 83 pages and has a cover by Deb Walsh. 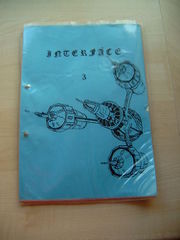 Interface 3 was published in April 1983 and contains 83 pages. It has a front cover by Barbara Callagher.

Interface 4 contains 122 pages and was published in August 1983. 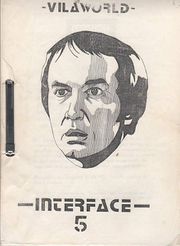 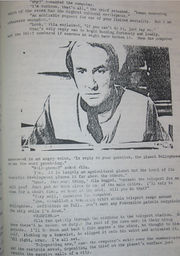 Interface 5 contains 84 pages and was published in January 1984. 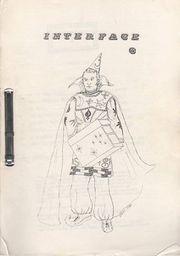 Interface 6 was published in 1984, contains 81 pages and has a front cover by Vikki Weidner.

Vilaworld zine, £1,50 inc. p S p - 81 pages A4 duplicated. Nicely presented with A photocopied photos and drawing of Vila as jester on cover. Cheap but adequate covers and binding. Great stories, as usual, especially the 2 long ones, first being a 3rd series story in which Blake is conditioned by Servalan and then is out to kill Avon, and the second an hilarious and very long skit on Hi-de-Hi, with a few other series popping in briefly. (Ed - this story was brilliant -one part had me choking on my cornflakes.) I shouldn't review this zine as one of my short stories is in it, but it is well worth buying anyway. [1] 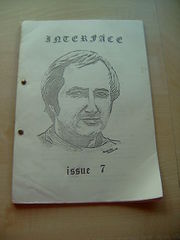 Interface 7 was published in September 1984 and contains 70 pages. It has a front cover by Rosemary Woodhouse. 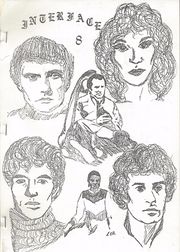 Interface 8 was published in September 1984 and contains 69 pages. It has a cover by EDR.

[unknown story]: Interface zine, may have been No. 8: a very good story about, I think, three of B7's offspring (Avon's certainly but the others I now can't quite specify, probably involving Anna, Servalan, Vila, maybe Blake). Their adventures I can't really recall except as an overall pleasure to read, but a picture how imagined the flight deck of their ship always comes compelling to my mind when I think of this story. [2] 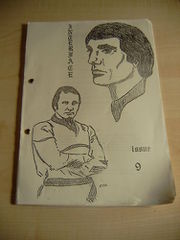 Interface 9 was publsihed in March 1985 and contains 66 pages. It has a cover by EDR. 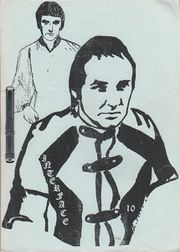 [Dreamscape]: Esther Reese's "Dreamscape" ("Interface" #10), is a the-4th-series-was--an-attempt-to-break-*Vila* story, and has a lot of overwrought emotion (I've warned you that I tend to enjoy that, right?) as Avon et all try to help a catatonic Vila back to sanity. (Makes a nice change from all the Avon-as-mental-health-poster-boy pieces.) [3] 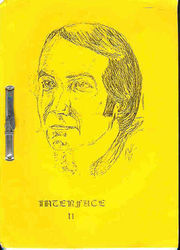 I didn't enjoy this as much as some of the other Interface zines, but at only £3.00 for over one hundred closely typed pages it still gives good value. There are zines costing five times that much which are in no way superior.

There are twelve stories in all. The longest is post-GP; "Intrepid Start" by Maggie Symon starts from the premise that Avon and Vila are the only PGP survivors. The plot idea is fine but a bit under-developed in places, and the other characters bland, existing only as plot devices. The focus is Avon and Vila's equivocal relationship, but too often this is stated as a fact rather than demonstrated by what they say and do. The motivation, particularly on Avon's side, is sketched in a perfunctory fashion. It's just not enough to say there's been a change of heart, we want to see why. Important matters are not given the exploration they merit; for example, Vila is worried by Malodaar, has a two minute chat with a doctor, and suddenly everything's ok. It's a great shame, because there's some excellent ideas in there and the plot line is well-thought out. Unlike some PGP stories it also has a convincing time scale.

There are several light-hearted stories in this edition. I enjoyed Leigh Arnold's "Vila's School of Hard Knocks", an adept and amusing twist on the Avon-Vila running feud, and "You look Marvellous" by Annie Wortham and Leah Rosenthal. There's also another creditable Orbit story "You Know You are Safe" by Linda Willard, though you need to believe Avon is a rotten shot to make the ending believable.

The second longest story "Full Circle" by Sue Bursztynski, is part 3 of a continuing saga featuring clones of Avon, Cally and Blake, with a bit part for Vila. I haven't read the first two parts or I might have liked this one more. It's difficult to get involved with new characters towards the end of their development, and as I'm not personally keen on stories featuring non-original series characters I didn't really enjoy this. However the writing is competent and if you've read the earlier parts you should enjoy this one.

The remaining stories are comparatively brief, and are a mixture of action, comedy and sentiment, but with no full-blown hurt/comfort. Authors are Joan Hoffman, Carol Wyke, Sue Clarke (Gan story), Faye Bull, Rose Prior, and Diana Taylor. [4] 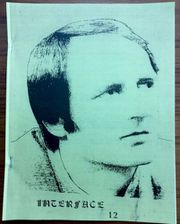 Interface 12 was published in April 1987 and contains 100 pages and a cover by Kathryn Andersen. There is no interior illustrations.

The cover has a fetching drawing of Vila by Kathryn Andersen, and the stories cover a range of writing styles. "Dragonrider" by Narrelle Harris has Vila in a mythical world fighting against and alongside dragons, dwarves and the like. "The BBC (Beeb Budget Cuts) or (Why Blake really happened)" by [Jan H] is quite an amusing piece of writing that also involves Dr Who.

"Vila's Story" by Natalie Jane Pryor is an eighteen page story about Vila's life in the months leading up to the London. This is a well thought out and convincing account that fits with the Vila we see in the series; it's not too sentimental but certainly not devoid of feeling.

"Intergalactic Velvet" by Leah Rosenthal and Ann Wortham first appeared in Southern Seven. The title makes any explanation of the content superfluous; if you like comic stories, this is a very good one. "Outside" by Helen Parkinson is one of those deceptively simple narratives that uses a brief moment to bring out different aspects of character. It reveals Vila's reactions on being briefly left alone on Saurian Major, his feelings of agoraphobia, uncertainty and need for reassurance, and his experiences of life as a Delta. Short but excellent. I have a weakness for this type of story; more, please.

The last story is "Perils of Cheat and Charmer" by Ros Williams, which has Vila as a prisoner of Servalan. I didn't find this one very convincing. I can't see the crew, especially Cally, abandoning him to his fate for over two months, nor Servalan behaving as unwisely as she does here. [5]